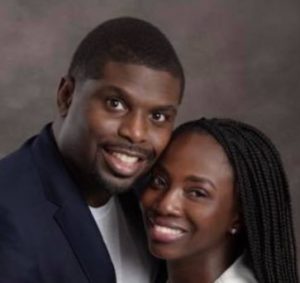 While the TLC’s Dr. Mercy star Dr. Mercy Odueyungbo might have led quite an interesting life, her husband Tony Jackson also seemed to have had his own share of the adventures. He is a former NFL player who went on to run Lilly Dermatology, after which he chose to pursue law academically.

Learn more about him as this Tony Jackson Wiki proceeds.

According to his birthday, Tony is of the Cancer zodiac.

Tony Jackson didn’t talk much about his family. But it did seem like he was close to his parents-in-law Fola and Modupe Odueyungbo. His father-in-law, Fola was the president of MOST Specialist Services PC, while information about his mother-in-law wasn’t available. As far as we know, she turned 61 on August 6, 2021.

Information about his hometown wasn’t shared.

However, do find him over Dr. Mercy’s Facebook profile @mayoodu, and her FB page @LillydermatologyUP (with 550+ followers) from time to time.

Tony Jackson is an adventurous person and has ventured on multiple jobs. Starting his career as a college football athlete, Tony went on to be drafted in NFL in 2005 by Seattle Seahawks. He was a sixth-round pick (196 overall), given a three-year $992,300 contract by the team. They said, “Jackson is a blocking specialist who doesn’t have much fantasy potential.”

In November 2011, Tony then joined Life Leadership Company as a financial, professional, personal development coach. He went on to work there for almost 7 years until he started working at his wife’s dermatological clinic, Lilly Dermatology. He worked there as its CEO and chief financial officer.

Over a year later, Tony then started his own business called Jackson Media Group in December 2019.

Sharing a little about his work ethics, Tony said, “We believe that information and association is what shapes people and the world we live in. My passion is adding value to individuals and building teams.”

If you want to learn more about his journey from playing football in the NFL to starting and operating a business with his wife Mercy, do check his video with Startup Grind Local titled, “Tony Jackson of Lilly Dermatology- Business is More Than Just Skin Deep”.

When he was not working, Tony loved reading a thought-provoking book, listening to a podcast while taking a leisurely walk, and spending time playing with his daughter.

In light of his education, Tony graduated from the University of Iowa in 2004, and after a long break, he joined Concord Law School at Purdue University Global to study law and business in 2017. He graduated in 2021.

Tony Jackson first met his future wife Dr. Mercy Odueyungbo back in 2002. But it wasn’t until 2015, the two held their wedding and went on to have a beautiful kid named Lilly.

Their daughter turned 3 in 2021 and was often seen over the duo’s family pictures. The last we saw Tony and Dr. Mercy with their daughter was at Toluwani Odueyungbo’s (Dr. Mercy’s sister) graduation ceremony in May 2019.

Recalling their first encounter, Tony shared that he physically ran into Dr. Mercy at the student union of the University of Iowa in 2002. But instead of apologizing, he kept staring at her. “I was stunned and could not speak. Those eyes literally left me speechless,” Tony shared.

However, Tony made up for it later and asked Dr. Mercy to be his science tutor. And the rest is history.

Fun Fact: Tony and  Dr. Mercy were all set to participate in the Dancing with our Stars to benefit U.P Hospice Foundation in 2020.