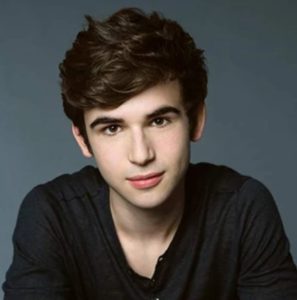 Among the recent Netflix titles, the one that’s on everyone’s watchlist is probably the Fear Street trilogy. The film series, which is an adaptation of R. L. Stine’s horror book of the same name, is divided into three parts, each of which drops maintaining a gap of a week with the other.

While there are characters from the first part who will reprise their roles in the second part, there are some fresh faces as well. One of them is the American actor Ted Sutherland.

His Role On Fear Street

Fear Street follows American teenagers in the fictional town of Shadyside, Ohio who are haunted by paranormal occurrences in the city spanning a century.

Ted Sutherland plays the role of Young Nick Goode, the eventual Sheriff of the town. In the film, Nick reportedly is in a romantic relationship with Ziggy Berman (played by Stranger Things actor Sadie Sink).

Ted was cast in the Netflix film way along before in 2019. His costars in this movie are Emily Rudd as Cindy Berman, Sadie Sink as Ziggy Berman, Ryan Simpkins as Alice, McCabe Slye as Tommy Slater, Brandon Spink as Young Will Goode, Chiara Aurelia as Sheila, among others.

Ted reprises his role as Young Nick Goode in the third installment of the film, Fear Street Part Three: 1966.

Ted Sutherland was born and brought up in New York. As of July 2021, we had no information on Ted’s parents and siblings.

Though Ted has the popular surname Sutherland, he is not related to acting legends Donald and Kiefer Sutherland in any way.

Ted Sutherland stands at a height of 5 feet 9 inches and weighs no more than 65 kilograms.

Ted Sutherland has been appearing on small screens for almost a decade now. However, he only found some spotlight after the NBC show Rise aired in 2018. Ted played the role of Simon Saunder in Rise.

The talented actor was also the cast member in The Walking Dead: World Beyond; Ted played the role of Percy. Most recently, Ted also appeared in Law and Order: Special Victims Unit as Ari Kaplan/Zack Foster.

On the big screen, Ted played the lead role of Dovid Meyer in the movie named Dovid Meyer. Ted has also appeared on screen with veteran filmmakers like Woody Allen and Liev Schreiber in the movie called Fading Gigolo. The movie, Fading Gigolo, won the Best Feature Award and Audience Award at the Miami International Film Festival.

As a voice actor, Ted has lent his voice to the character of Jack Marston in the video game, Red Dead Redemption II.

Like many actors, Ted started his career as a theatre artist. Some of his theatre credits include Lost in the Stars at New York Stage, Fanny at Encores!, and Halfway, Nebraska at New York International Fringe Festival.

As the actors keep getting popular, it is very common for them to be the subject of gay rumors. In this case, Ted Sutherland too has been the subject of the same.

More than popularity, Ted’s role as a Simon, a gay character, in the NBC TV show Rise made him subject to various gay rumors.

However, Ted Sutherland is not a gay person in real life. Moreover, Ted even had an actress girlfriend up until a few years before.

Ted Sutherland started dating his Rise costar Katherine Reis circa 2017. The Rise star and his girlfriend, Katherine attended various events together and uploaded pictures in their respective handle. Ted and Katherine were very transparent about their relationship. 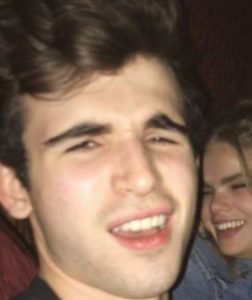 Ted Sutherland with his now-former girlfriend Katherine Reis in the background.

However, things changed in 2019. Both of them suddenly stopped posting pictures with each other on their socials.

This made everyone think the couple had broken up. Indeed the speculation turned out to be true as Katherine started dating actor Jack DiFalco, best known for The Goldfinch and Daredevil and uploading pictures of him on her Instagram handle.

As of July 2021, we did not know if Ted Sutherland was single or otherwise.