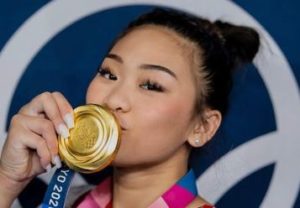 At the 2020 Tokyo Olympics, Suni Lee became an Olympic all-around champion. She was the first person with her ethnic background to do so.

Here’s everything you need to know about Suni Lee’s ethnic background, her parents’ nationality, and boyfriend.

To pinpoint her ethnic background, Suni Lee is of Hmong descent. She is an

As per the 2010 U.S. census, around 260K Hmong Americans were residing in the United States.

Hmong, if you don’t know, is an ethnic group from parts of China, Laos, and Vietnam. The 18 clans of Hmong famously fought alongside the United States during the Vietnam War.

When the US pulled out of Laos after the country fell to the communists, the Hmong people took refugees in Thailand. They would later settle in America.

The entire Hmong community seemed proud of Suni’s achievements. One of her relatives Sia Lo told NPR: “The Hmong here is very proud to be American. We hope all of America is proud of Suni. What she’s achieved showcases what is possible here in the United States.”

According to npr.com, Suni Lee’s parents John Lee and Yeev Thoj were born in Laos. As children, they fled Laos and joined many other Hmong people in the refugee camps in neighboring Thailand before resettling in Minnesota, USA. John and Yeev would eventually become the citizens of the United States Of America — meaning, Suni Lee’s parents are full-fledged American nationals.

Yeev Thoj and John Lee have 5 more kids besides Suni.

John Lee, who supported Suni Lee’s gymnastic dreams from the start, became paralyzed from the waist down in 2019 after falling from a tree while helping his neighbor.

The accident transpired days before Suni competed at the US gymnastics championships. According to npr.com, during the competition, Suni “made the all-around finals alongside Biles and finished eighth. She won gold in the team competition, silver in the floor exercise, and bronze on the uneven bars.”

Talking about tragedies that struck Suni’s family, she lost her uncle and aunt to COVID before July 2021.

When Suni Lee achieved her Olympics glory in July 2021, she seemed single. Only those who were close to the gymnast knew if she had a boyfriend.

Suni’s Instagram, which boasted over 600K followers as of 29th July 2021, wasn’t a window into her dating life. Her posts on the platform didn’t give out her romantic endavours.

Back in May 2021, Suni attended her high school prom. She even uploaded several photos on her Instagram. Again, the gymnast didn’t post her date for the event. Instead, she snapped photos with her girlfriends.