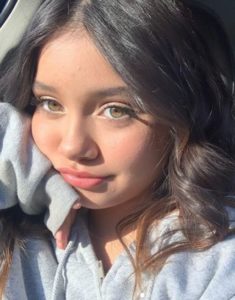 Sophie Michelle is a young YouTuber turned actress best known for her YouTube vlogs. Her contents on the said platform encompass self-care videos, back to school series, cover songs, makeup tutorials and many more.

This wiki-style article helps readers unravel career pursuit along with personal details including her boyfriend and dating info. So scroll down as the details unfold on the famous YouTuber.

Sophie Michelle was born on the 16the of August 2005 in Richmond, Virginia. She turned 14 years old while celebrating her birthday in 2019.

And as per her birthdate, she is a Leo by zodiac sign.

Like many, she attended public school but after completing 7th grade she was homeschooled by her mother.

After she started her YouTube channel she was verbally abused at school. The exploitation and bullying reached a tipping point where her mother felt the necessity to privately educate for her protection.

Sophie Michelle was born to her lesser-known father and her mother Karina (Kay) Michelle who helps manage her social media accounts.

Her parents were divorced when she was young and her mother took the responsibility of taking care of her, after the split.

She was no siblings as of the time when this article was penned but has a stepbrother named Alex whose further details left no traces on public records.

Sophie holds American nationality while hailing the Latin-American ethnicity on her mother’s side. Her mother was originally from Sao Paulo, Brazil.

The YouTube star had spent a brief period in Sao Paulo when she was 3.

She always had the personality and the talent to make it big in the entertainment industry.

The YouTube celebrity had a love for performing from an early age and went on to hone her talent as she grew up. She learned to play the violin when she was six.

With a dream to be a musician, she even tried her luck in America’s Got Talent, twice, but failed to compete on the show both of the times.

But one fateful day, Sophie Michelle got the opportunity to meet Cloe Couture in a mall. After being hugely inspired watching her, she decided to start her an eponymous YouTube channel.

The channel was started in November of 2015 and an introductory video was uploaded as the first content.

After 5 years, the channel successfully houses a diverse range of contents which gained her widespread recognition in the world of YouTube. Along with that, she started releasing her original songs through her channel, fulfilling her dream of being a musician.

Moreover, her YouTube success kicked-open doors for her to pursue a career in acting as well as modeling.

In addition to that, Sophie also initiated a modeling career.

Besides that, she even has her merch line and all the businesses are handled through her self-titled website.

Sophie Michelle’s YouTube channel flaunts an attractive 780K subscribers and counting. Her success on YouTube helped her gain the same level of success on other social media platforms.

The Someone Else in the Dark singer has 550K followers in her Instagram handle. Whereas, her TikTok account has a burgeoning 322.7K followers with 10 million likes in total.

The teen brunette’s Greenish-Grey Hazel colored eyes with a curved natural eye-brows. Her beautiful face adds to her beauty which highly influences her stunning look.

In March of 2019, Sophie Michelle got invited to a birthday party in Los Angeles where she had located temporarily. And like most parties do in LA, they had a red carpet set up with a backdrop for taking pictures.

She went to the party with her friends Brian and Sawyer and took pictures together. But a little after, she started getting text messages from her friend regarding the pictures.

The rumor of her having a boyfriend spread like a wildfire. But she turned down the dating rumor preparing a video a week after on 23 March 2019 and confirmed they were not dating each other.

The same had happened between Mason and Sophie before, and again she also addressed the same in the same video.

So, Sophie was single and was in no relationship with anyone as of the end of March of 2020.

Charly Jordan — a socialite, and an independent DJ — skyrocketed popularity after earning an...