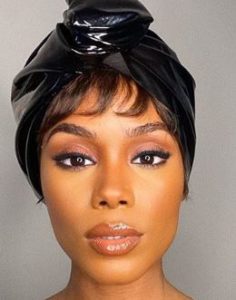 Starz network’s latest offering P-Valley left people captivated and spell-bound. The show explored the life of strippers, the hardship that has to deal with, and everything that comes in between.

Among several stars on the show, actress Shannon Thornton made the fans stick to their electronic devices because of her stunning looks and phenomenal performance. But, very little information has been shared on Shannon Thornton.

So, delve into this wiki-article to know more about her.

Shannon Thornton blows her birthday candle every year on 24 July. She turned 33 years old while celebrating her birthday in 2020.

As for her zodiac sign, she is a Leo.

Shannon Janai Thornton was born to her anonymous parents in Hartford, Connecticut. Because of her private nature, she avoided sharing the details of her parents and other family members.

Other than that, details on her nearest and dearest are yet to make it to the public records. And that also included her possible siblings.

Moreover, Shannon is blessed with the measurements of 37-26-38 inches which gave her an enviable look like a model. Most of her fans on social media remarked that she resembled the singer Whitney Houston.

As the success of an artist depends upon the number of people that support them, Shannon Thornton surely boasts a huge fan following on her social media.

Similarly, Shannon is also on Facebook where she promotes she is on. And her fans crowd the comment section to wish her good luck with her career and future endeavors.

As already mentioned, Shannon Thornton was raised on soap operas and TV shows which she watched alongside her grandmother. And ever since then, her love for acting budded inside her persuading her to follow a career in entertainment.

Plus, she grew up idolizing Michael Jackson as he influenced millions of people with his performance.

After she moved from Connecticut to New York to pursue her career in acting, Shannon struggled like any other artist. But, because of her good looks, she landed modeling opportunities which helped her career take a step close to establishing a successful career.

She landed a modeling campaign with Creme of Nature which marked as her modeling debut. Her face made it into several magazines including Essence, Black Hair Magazine, Hype Hair, and even on billboards across the globe.

Her commercial stint included the work with Ford Focus. Around that time, Shannon worked the hardest that she ever did.

But the biggest break of her acting career came when she landed the part of Miss Mississippi/Keyshawn in Starz network’s TV show P-Valley. Her fans and critic had nothing but the words of admiration to offer for her work in the show.

Shannon Thornton is an undeniable beauty and there is no denying that. Her captivating looks attracted thousands of man and some might’ve even slid into her DM to get her attention.

But, as of Summer 2020, the way it looked, she was yet to get into serious relationships — let alone get married — as she was never spotted getting romantic with anyone. Moreover, her past boyfriends and flings didn’t catch media attention.

So as her career is in a thriving phase, we can assume that she might be focused on her career rather than looking for a potential husband.

Obviously, it is natural to have a desire to see one’s favorite artist in a relationship. But in the case of Shannon, the husband and children thing might have to wait.

Brandee Evans has been in the entertainment industry for almost a decade. But, not until 2020, she was able...