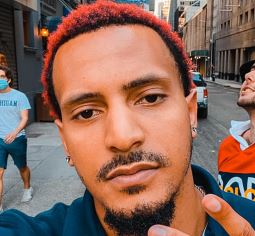 If you are a fan of antics and pranks and spend hours on Youtube to get a good laugh out, then you might have heard of Seth Francois. He was a part of the pioneer Youtube prank channel, David Dobrik (Vlog Squad).

But though it might seem fun and hilarious, watching the hijinks they pull on each other, the one the receiving end isn’t always happy about it. And so was the case with David! He revealed that he was used as the punchline for racist jokes, felt pressured to participate in culturally insensitive bits, and finally fell victim to a sexual assault.

Keep reading this Seth Francois wiki to find out more about him.

Aside from the racist jokes, Seth Francois shared that he was most hurt and “still experiencing trauma” by the prank played on him by Josh Nash. He shared,

“Honestly didn’t realize how much that situation affected me until the beginning of last year when COVID happened. I remember sitting in my room in Atlanta and I was thinking to myself, That video was wrong. I just felt like that shouldn’t have happened to me.”

Over the video titled “HE THOUGHT HE WAS KISSING HER!! (SUPER CRINGEY)”, Seth was pranked by Josh, where Seth was tricked into kissing another Vlog Squad member, Corinna (who in fact was Josh in disguise).

According to Seth he never gave consent to the kiss with Nash. He knew that it felt “wrong” and decided to call a sexual assault hotline. To which, he was answered,

“’I’m sorry you were sexually assaulted.”

Seth then immediately broke down and called his mother and some of his close friends to share what happened to him. Later, he talked to David and Nash about it but instead of acknowledgment, they offered him money.

Though Seth left the Vlog Squad in 2018, he shared that the reason for him to speak now was to “teach a lesson” about the abuse of power and help others who experience similar “trauma”.

As per his birthday, Seth is of the Aries zodiac.

Seth Francois grew up in Sacramento, CA but his hometown is originally Lancaster, CA. He was named “Joseth” after his parents — father Seth and mother Joi.

Reportedly, his father was a musician in his younger years. Also, most of his relatives were musicians, models, actors, etc. Thus, he developed a passion for the entertainment industry from an early age.

As for his ethnicity, Seth is African American. Also, he was the only Black member of the Vlog Squad.

In light of his education, Seth went to Elk Grove High School. Once he graduated, Seth was interested in perusing music. He then attended the Art Institute of California, Los Angeles, where he studied audio production. Soon, he produced and directed his first music video called Cherry Red.

Mentioning his distinct features, Seth has brown eyes and bleached hair (in Feb 2021). Also, he has a tattoo over his arm inscribed “SERTIFIED”, which is the named of his company.

Seth’s journey to the limelight started back in college when he met his now-best-friend and business associate Dominykas Zegliatis a.k.a. Durte Dom. The two threw a lot of house parties in LA and gained a lot of connection then. Soon, he was well recognized and people started reaching out to him from self-promotions.

But, Seth ran out of resources and started to burn out quickly. He shared,

“I was sleeping in my car, my phone was the only connection I had to all of these people and I couldn’t even afford to pay the bill.”

Then, he met Jordan Sweat who promised him a job as a PA on a film set in Atlanta. So, Seth made his way to Atlanta, explored the city, and did exactly what he did in LA — developing organic friendships and prompting his casting company.

Seth Francois’s Facebook mentioned him as “single” as of 2021.

Amidst the controversy with David Dobrik’s Vlog Squad, Seth remained private about his dating life. His record of former girlfriends wasn’t found then.

“Blurry or not blurry or not, monetized or not. you dont get to decide because ITS NOT YOUR BODY! yes, what i say in it is horrible and i am so ashamed but it’s also disgusting that you’re using my trauma as a way to hold me accountable.”

Also, fans were pretty upset about this matter. Many urged Erin to sue Seth for his action.