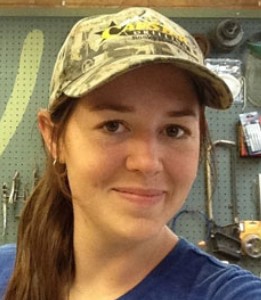 For anyone who is building their new homes or thinking about making some changes in their house, April Wilkerson might be the person you want to look up to as her YouTube channel is filled with DIY woodwork and metalwork tutorial videos.

April shot into the limelight in 2021 after she joined History’s reality TV show, Assembly Required, a series where builders from all over the United States compete for a prize, as one of its judges alongside Home Improvement stars Tim Allen and Richard Karn.

YouTube star April Wilkerson was born on October 3, 1987, which meant her age was 33 as of Feb 2021. Furthermore, the blogger at Wilker Do’s celebrated her 33rd birthday on October 3, 2020. Going by her birth date, her zodiac sign is Libra.

April Wilkerson is a born and bred Texas girl whose hometown was around the south Texas coast. The Texas native was very close to her parents in her childhood, and she continues to have that attachment with her family.

On October 11, 2020, April told her fans that she spends the entire Sunday on a golf course with her dad. On May 10, 2020, the DIYer wished a happy Mother’s Day to her special mom.

Uploading a picture of her young self, her mom, Rita, and her sibling (a brother), Aaron, April wrote: ‘Happy Mother’s Day to my very special Momma. She is such a handful! but man do I love her. There isn’t a person alive who has a bigger heart than her.’

For education, April studied business management at the University of Texas at Arlington and graduated from there in 2012.

Not only does the YouTuber April have an excellent career, but brilliance oozes through her body too. April Wilkerson, who stands under 5 feet 8 inches, is one attractive woman. In correspondence to her height, April has a perfect weight of 56 kilograms.

April, who likes to be called “a Maker, a DIYer, a Woodworker or Metalworker”, has extensive social media reach across all social media platforms including YouTube, Facebook, and Instagram.

Assembly Required star’s eponymous YouTube channel had more than 1.34 million subscribers as of February 2021. Her YouTube channel is full of beginner-friendly DIY and building tutorial videos.

April Wilkerson’s net worth is reported to be around $2 million.

Until 2013, April considered woodworking as a hobby and did not think she could make a career out of it. But, when she found out that the thing she wants in her home was out of her financial reach, she began building things and started putting those tutorial videos on her website.

Since March 2015, April has been working at her own business, Wilker Do’s, LLC as a woodworker. Since her beginner-friendly tutorial videos were of help to a massive number of people, she blew up on all kinds of social media platforms.

April’s genuine desire to help others has taken her from nothing to one of the most successful people in the DIY and woodworking world.

Her blog, Wilker Do’s, and her YouTube channel have welcomed a lot of followers lately. That is one of the reasons, why April was cast as the third member of Assembly Required.

As one of its judges alongside Tim Allen and Richard Karn, April will help Assembly Required find great builders from the United States.

Coming to April Wilkerson’s personal life, the famous YouTuber married her husband, Cody, in June 2010. While not much is known about their dating life, it seemed like they had a great connection, which was clearly visible in April’s Instagram videos.

Cody is an Engineer by profession and a motorhead by hobby. According to April, her husband, Cody knows a lot about a lot and uses a motor and lots of horsepower in his works.

The adorable duo celebrated their sixth wedding anniversary on June 4, 2016. Uploading a picture from their marriage, April wrote, “Man time flies! Today Cody and I are celebrating 6 years married.” 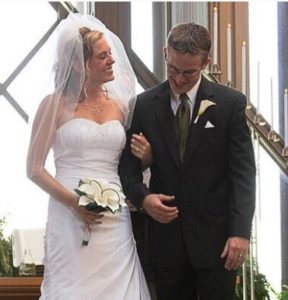 April and her husband Cody during their marriage in 2010.

As an engineer, Cody was of great help to April while they were undertaking various home improvement projects.

Though the charming pair had a lot of attachment and connection, they probably divorced some time ago. Since April does not wear any ring and no longer mentions Cody in her YouTube videos, many people believe the couple divorced sometime in the past.

While that can’t be said with a guarantee, it can’t be ignored too.