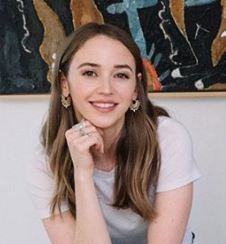 Olivia Korenberg gained overnight fame in October 2019 after the media outed her as the new wife of Seann William Scott.

The “American Pie” notoriously kept the identity of his better half secret from the public eye.

Acquaint yourself with Olivia Korenberg by going through her wiki-type biography!

Everything suggests that Olivia holds an American nationality. In terms of ethnicity, she most likely identifies as a Jewish woman.

Her last name “Korenberg” insinuates that one of her biological parents followed Judaism as his/her religion.

As of February 2020, important details including her family lineage and siblings remained hidden. In part because Olivia kept her Instagram private.

Concerning the job title, Olivia Korenberg is an interior designer.

Based in Los Angeles, Olivia is the co-founder of a boutique design firm called “TwoFold LA.” Her company specializes in commercial and residential interior design, event styling, design, and consultant services.

Per the Instagram account of “TwoFold LA,” Olivia quit her position as the firm’s principal designer in mid-August 2019.

While still with the company, she traveled overseas. Admittedly, she also had the opportunity to organize the wedding for a pair that she knew since high school.

In her open resignation letter, Olivia professed excitement over the firm’s future endeavors.

Olivia together with pal Jenn Pablo had started “TwoFold LA” in 2011.

Between May 2009 and July 2010, Olivia served as a design assistant at “Digs By Katie.” Immediately after, she got a similar job at “Avenue Interior Design.”

If not for her background in interior design, Olivia once admitted that she would have been a filmmaker.

By 2020, Olivia Korenberg’s net worth had risen to above $600 thousand. Meanwhile, she reportedly stands above 5 feet 4 inches in height.

A deeply guarded individual, Olivia Korenberg shuns the limelight. Her distaste for the spotlight became evident when she didn’t peep a word after then-boyfriend Seann William Scott opened about them dating.

During his US Weekly interview in September 2019, Seann described Olivia as “a great girl” and a “pretty private” individual. Later that month, the duo got married in a secret ceremony.

As of February 2020, there was no word on when and how Olivia commenced her romance with her husband Seann.

Before Olivia, Seann enjoyed quite a dating history with some of Hollywood’s most talented women. January Jones, Jaime King, Deanna Miller, and Lindsay Frimodt were his notable ex-girlfriends.