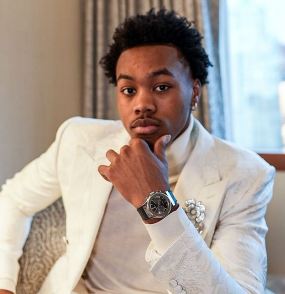 Scottie Barnes was the Florida State University athlete who everyone hoped he would make it and the dream actually came true. He was secured by Toronto Raptors in the 2021 Draft as the fourth overall pick.

Learn more about his father, baby mama, kid, and his career with this Scottie Barnes article.

Scottie Barnes was born to his father Scott Barnes Sr. and his mother Kathalyn Wilkins in his hometown of West Palm Beach, Florida, United States. He shared very little about his father, but he spared a few details here and there.

Furthermore, Scottie’s father, Scott Barnes Sr. hailed from Jamaica and also had quite an influence on his basketball career. As Eric Smith from Raptor’s radio tweeted, Scottie’s father used to make him watch a ton of Magic Johnson’s tape while he was growing up.

This had a huge influence on Scottie’s game and his love for his game, so he was always thankful for his father for that reason.

Scottie Barnes isn’t the only kid born to his parents. He has three siblings: Jon French Barnes, Shawn Barnes, and Shellya Wilkins. After their parents separated, their mother took the sole responsibility of taking care of the kids when Scottie was 11. Together, the four kids lived downtown, of what is now Rosemary Square.

The four siblings have always praised their matriarch for being as strong as she is for her children. Based on Shellya’s FB account, she appears to be in a relationship and has a son with her partner.

According to Bleacher Report, Scottie Barnes, playing as SF/PF, will make a projected salary of $ $6,067,100 in his first year. He was the fourth pick of the 2021 NBA draft by the Toronto Raptors. So, his net worth should be at least $6 million.

Ever since Scottie Barnes was in the third grade, he would walk around with a basketball. He ran track and after returning home from track practice, he went straight to the Salvation Army to play basketball.

Every night in the middle of the road, Scottie used to practice and the same perseverance got him to where he reached today.

Scottie would play at Alice Mickens Park or the Salvation Army. One fateful day a travel team discovered him which gave him his first real exposure. He spent a year at Cardinal Newman did not work out for him at least on the court. But, he still was named to the Palm Beach Post’s All-Area Small Schools second team.

Scottie attended high school at Cardinal Newman High School in West Palm Beach, Florida. During his freshman year (2016-17), he helped his team to a 19-8 record and the 5A regional semifinals. From 2017-18, Scottie helped his team to a 36-2 record, a 5A state championship, a City of Palms Classic title, and the final game of the GEICO High School Nationals; during the GEICO Nationals averaged 21.3 ppg. and 9.7 RPG. over three games.

Scottie played alongside 2020 USA Nike Hoop Summit teammates Cade Cunningham and Day’Ron Sharpe. He signed a National Letter of Intent with Florida State University. He was ranked No. 8 in the ESPN class of 2020 rankings.

At FSU, Scottie averaged 10.3 points, third on the team behind M.J. Walker and RaiQuan Gray. He led the Seminoles with 4.2 assists and averages 3.9 rebounds. He secured the second spot in the ACC with a 2.33 assist-to-turnover ratio.

On top of that, Scottie has been named the conference Freshman of the Week two times.

Does Scottie Barnes Have A Baby Mama?

Who Is Scottie Barnes Girlfriend?

Unlike Scottie Barnes’s professional life, his personal life is a concealed detail yet to be unraveled. He remains private about his dating life and is spared no information on his girlfriend — past or present. But, as one of the top-rated players and an NBA draft, Scottie is a tall handsome, and the accomplished guy who girls would love to go out with.

Scottie addresses his family in several interviews but never talked about having a kid or dating someone.