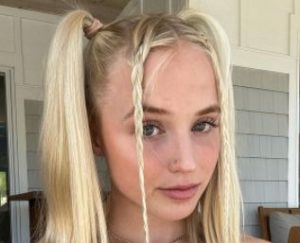 It’s a lovely thing when couples share their passion for sports, and even more when they do it professionally. In that regard, Jalen Suggs and his girlfriend Hailey Van Lith were one of the duos who shared their love for basketball and looked amazingly good together.

Delve into the life of Jalen Suggs’ girlfriend as this Hailey Van Lith wiki proceeds.

Hailey Van Lith was born on  September 9, 2001. That made her 19 years of age; just 3 months younger than her boyfriend Jalen.

As per her birthday, Hailey is of the Virgo zodiac.

If you are wondering, Hailey Van Lith’s parents Jessica and Corey Van aren’t sports stars. In fact, they were full into building homes and the real estate business.

However, Hailey’s dad, Corey does admit that he did want to become a basketball player all his life. He even attended college on a scholarship for baseball, while earning a degree in biology.

But eventually, he started working at his family’s excavation company and involved his wife in it.

As of 2021, Hailey’s mom, Jessica was working as the vice president of Van Lith Developments, Inc. She is a  Wenatchee, Washington native who attended  Eastmont RED ZONE school.

Reportedly, they started the company circa 2002.

Trivia: Hailey’s parents were married in 1997.

Does Hailey Van Lith Have Siblings?

Yes, Hailey Van Lith has a 3-year-older brother named Tanner Van Lith. He was an athlete like his sister who played baseball.

As of 2021, Tanner was studying Business Information Systems at GCU, and also played for the college baseball team as “Relief Pitcher and Outfielder”. Previously, Tanner has played for Bellingham Bells, Kelowna Falcons, and Corvallis Knights.

Tanner was dating Keeley Bossman at the time.

Did you know: Hailey and Tanner were involved in a shoe business that went by the name “Gigi” @haileyvanlith11 over IG.

Though not as popular as her boyfriend, Hailey Van Lith is an accomplished basket player. As a freshman in 2020-21, Hailey started in 26 games for the Cardinals with an average of 11.2 points, 5.5 rebounds, 2.2 assists, and 1.2 steals per game and helped lead her team to the Elite Eight.

As for her high school, Hailey went to Cashmere where she was named 2020 McDonald’s All-American.

Summarizing her style, Hailey played point guard and had an uncanny ability to score at all three levels.

Hailey Van Lith earned herself a network of under $1 million by 2021. Reportedly, her “NIL Rights” was estimated to be close to $1 million as well.

Likewise, her boyfriend Jalen Suggs then flaunted over $36.8 million then.

Hailey Van Lith And Jalen Suggs: Dating, How Did They Meet?

Though it was not clear when Hailey Van Lith and Jalen Suggs first started dating, we’re pretty sure that they first met at one of their basketball camps at the Team USA tournament, or through a mutual friend. Overall, it was their love for basketball that bought them together.

Hailey and Jalen Suggs first went official in June 2021, after sharing matching IG posts that featured PDA photos of them captured in LA. Over Hailey’s, she wrote, “4 my eyez only”, while Jalen captioned, “Yea, we solid on this end”

From the looks of it, the two were serious about it other. No wonder, Jalen didn’t hesitate to call Hailey his “wife” publicly. Yes! on Hailey’s July 8 IG post captioned “simple”, Jalen commented, “Hey wife (drool emoji) X2.” 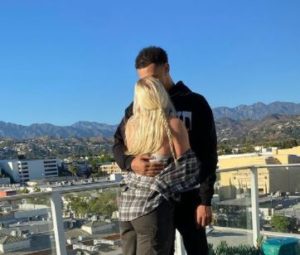 Just in case you are here as a fan of Hailey and don’t know who Jalen Suggs is, he is a basketball star who was selected fifth overall by the Magic in the 2021 NBA Draft. Like Hailey, he’s a point guard who played for Gonzaga Bulldog, FL.