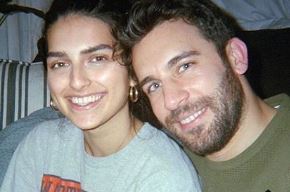 Saffron Vadher became the talk of the Bachelor Nation after she began dating Derek Peth.

In the article below, read about Saffron’s wiki including her ethnicity, net worth, and parents. Furthermore, discover her siblings, former boyfriend, and height.

Saffron Vadher became 23 years of age in the Spring of 2020. What’s more, healthyceleb.com cited 1997 as her birth year.

Likewise, Saffron was born an Aries and celebrated her birthday on 6th April every year.

To mention her background, Saffron Vadher flaunted multiracial ethnicity. Also, she was born to a bi-racial couple.

Saffron grew up under the care of an English mom named Debbie Knight and an Indian dad who grew up in Kenya.

Moreover, in her family, Saffron had a sibling named Sasha Nicole Vadher. Like Saffron, Sash also worked as a model.

A native of London, Saffron owned a British passport.

At age 4, Saffron was diagnosed with pediatric leukemia. By her admission, she lost a lot of hair while undergoing treatment. Saffron also developed a fear of needles.

On the bright side, Saffron’s family spoiled her with gifts. At one point, she remembered owning around 200 dolls.

Furthermore, Saffron was born with beauty marks around her left eyebrow and cheek.

As a teenager, Saffron was scouted on multiple occasions. Nothing came out of those meetings, however.

Before modeling became her full-fledged career, Saffron worked at regular spots like Pizza Hot. She even interned at the John Lewis food hall.

Taking a giant leap of faith, Saffron attended a walk-in audition at the London-based agency “Elite Models”. Impressed, the agency signed her then and there.

As her career progressed, Saffron graced the covers of “British Vogue” and “Paris Vogue”. Furthermore, she modeled for brands like “Burberry,” “Alexander McQueen,” and “Givenchy.”

Active on TikTok, Saffron accumulated 9.4 thousand followers on the platform. Moreover, she owned around 53.2 thousand likes.

In 2020, Saffron ignited a romance with Bachelor Nation star Derek Peth. June that year, the pair confirmed the dating rumors.

Before Saffron, Derek had reportedly enjoyed a fling with Taylor Nolan.

When the COVID-19 pandemic forced everyone into lockdown, Saffron made a conscious decision to quarantine Derek.

What’s more, instead of London, Saffron picked her boyfriend’s hometown of Iowa to quarantine. As seen on her IG, she was enjoying sightseeing in the Midwest state with Derek.

As of late-June 2020, neither Saffron nor Derek spoke on how they met and when they officially began dating. Furthermore, fans of Derek began believing she could be the one for him.

To everyone’s joy, Saffron accepted Derek’s proposal. The reality star then took to Twitter to announce their engagement. He also took to IG Story and uploaded a clip of the engaged duo flaunting the beautiful ring.

Alice Delahunt married her longtime lesbian partner Reese Lasher on 13th October 2019. They did so in a...