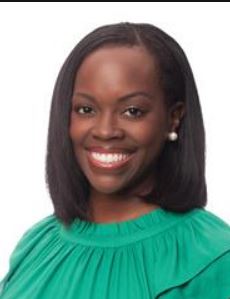 On 15 March 2020, former Tallahassee Mayor Andrew Gillum was discovered in the Mondrian Hotel in Miami’s South Beach last week. Police officers found him with another man who was overdosed on drugs. While Andrew denied drug abuse and claimed he was leaning towards alcoholism. His wife R. Jai Gillum has decided to remain mum regarding the matter.

For those of the readers who are vaguely familiar with Andrew Gillum’s wife, this wiki-article was built on the career, relationship, and biography of R. Jai. Gillum. So scroll down as the information unfolds.

R. Jai Gillum or Rashada Jai Howard was born on 4 May 1978 in Tallahassee, Florida, the United States.

She completed the glorious 40 years of her life and stepped in 41 years of age while celebrating her birthday in 2019.

R. Jai Gillum inherited her name and her academic qualification through her parents. Her parents were academic scholars and professors at Jackson State University.

While her father was working as an instructor at the Jackson State University, in Mississippi, he had a female student, terminally ill, whose name was Rashada. Rashada was earning her Ph.D. and became the first student of her father to ever do it.

In honor of that, her father named her Rashada as she recalls.

Rashada took her academic decisions based on her dream to become a successful dentist. She enrolled at Florida A&M University in Tallahassee to earn a Bachelors Degree in Biology.

For a brief period, R. Jai moved to Dallas, Texas, and worked at a bank. But the position she held, wasn’t fulfilling her dreams so she quit the job and moved back to join in again at A&M University.

Following her enrollment, R. Jai took the course of public health and public policy focusing on the administrative front of the subject rather than carrying on with Dentistry. She wanted to ensure that everyone had access to health care.

After she achieved her Bachelor’s degrees, R. Jai further continued and earned her Masters in Health, Policy, and Management from the same. She graduated with the inaugural class of Florida Gubernatorial Fellows.

In addition to that, she was overly involved in E.C.A as well as academic pursuits. R. Jai Gillum was celebrated as a student body Vice-president from 2000-2001.

Besides her short-lived gig as a Banker in Dallas, R. Jai Gillum was working with local administrative bodies.

The fellowship program, which was provided by the university, offered her opportunities to work alongside government officials. She extended her voluntary service which served people of the community she lived in.

At the state Department of Health, R. Jai worked on the ” Oral Health Safety Net.”

Rashada after completion after graduating, R. Jai continued her work of welfare through her association with the Boys and Girls club.

In March 2007, an opportunity to work as an assistant to Alex Sink, a State’s chief financial officer then, came knocking on her door. She stepped down from the fellowship program and joined the office. It was the real start of her career in the public sector.

In 2008, through hard work and dedication, she ranked up and held the position of director of appointments for the Office of Boards.

R. Jai Gillum and her now-husband Andrew Gillum have quite a story to tell about how they met each other.

Bein the Florida A&M University classmates, the paths of the two often crossed. 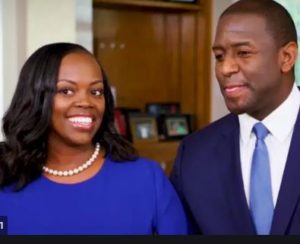 Andrew had a thing for Rashada but he hadn’t built up enough courage to admit it so he frequently looked for ways to flirt with her.

As both the involved were Members of the Student Government Association, once he was presented with an opportunity to flirt with her which he had been looking for.

R. Jai showed up to the meeting wearing a short skirt which B.T.W. she claimed was a business suit. Andrew gave her a warning and didn’t even listen to her.

While R. Jai was away in Dallas, Andrew had already become the youngest person ever to be elected as a member of the Tallahassee City Commission.

After she returned, the couple met each other by chance at the Governor’s Square Mall. Andrew with his two cell phones and a pager gave a heads up that he was a busy man to mingle with.

But, Rashada got his number but never called back.

But, a professor from the university decided to set them up for a date without letting either of them know about it. And this time, the romance sparked between the two and rest was history.

The dating couple tied the knot and stayed a newly-wed couple before they decided to add new members to the family. The span of one year after their marriage, they enjoyed each other’s company as a husband and wife.

After a while, the married couple was blessed with twins. The boy-girl twins were named Jackson Gillum and Caroline Gillum.

Following that, they had their third child, Davis Gillum.

R. Jai showed her diligence in balancing her life as a mother, wife, and government official. She and her kids played a huge part while her husband ran a campaign for the office of governor in 2018.

As her husband got muddled in the drug and gay male escort, Travis Dyson, scandal, she has decided to remain mum regarding the issue.

While Andrew claimed he was inebriated with alcohol, he didn’t agree to the abuse of methamphetamine found in his hotel room.

Before police had arrived an unlicensed physician by the name Aldo Mejias was forced to call 911.

When Mejias arrived in his room, both individuals were vomiting.

Following the commotion, he has decided to go to rehab for his betterment and apologized for the event that transpired.