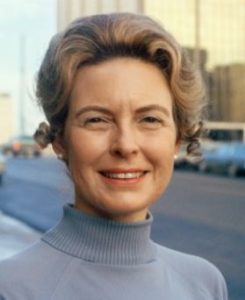 Who Was Phyllis Schlafly?

A Choice Not an Echo (1964) author, Phyllis Stewart Schlafly was born on 5 August 1924 in St. Louis, Missouri, the United States.

With her father enduring long-term unemployment, her mother took the responsibility of raising her and her sister Odile Stewart. No matter how hard her mother had to work to make the ends meet, her mother made sure she got the required education.

Phyllis attended Catholic Girl’s school growing up. After graduating high school, she attended the Washington Univerity to earn her bachelor’s degree in Arts in 1944. Following that, she earned her Masters from Radcliffe College.

In 1946, she worked in the campaign of the Republican Claude I. Bakewell for his run for the United States House of Representatives.

She also was a leader of the anti-feminists counter conference to protest the National Women’s Conference. The primary idea of the conference was to establish Family Value in American politics.

Phyllis was also credited for organizing STOP (Stop Taking Our Privileges) ERA (Equal Rights Amendment) during the 1970s. She also was a forefront activist speaking against the Same-Sex marriage and the concept of marital rape.

On 16 May 2008, Phyllis was awarded an honorary degree as a Doctor of Humane Letters. However, many faculties and students were against the decision and protested to revoke the honorary degree.

Who Played Her On Mrs. America?

On 14 April 2020, a mini-series titled Mrs. America was streamed by Hulu. The show was based on the life of Phyllis Schlafly and explored her career as a political figure and social activist.

Along with that, the show explored 1970’s feminism in unscathed. The show addressed a war of the pre-existing culture and a new wave of social transformation leading to the rise of the Moral Majority which greatly helped in shifting the political topography.

Cause of Death: How Did She Die?

No details on the nature of cancer she was battling with was ever made public. However, press reporters confirmed she had died in her home in Missouri. All of her children were present when she was taking her last breath.

During her final six-months of her life, Phyllis was completely isolated and only a few were allowed to meet her during that time.

The anti-feminist activist was married to her husband, John Fred Schlafly. The couple had tied knots in 1949 a year after their first meeting.

Fred Schlafly belonged to a wealthy Banker’s family in St. Louis who had successfully established himself as an attorney. The pair would exchange letters on political and theological topics on their rendezvous once a week.

As per Fred, he met Phyllis when he was preparing for a debate and was reading a newsletter which happened to be hers. The couple met over a lunch organized by Fred and formed a long-lasting intellectual bond.

Being a Family Value supporter, she decided to put her family first rather than her career and it was worth doing it as per her. The decision to chose family and taking care of her children over building a successful career provided more satisfaction to her.

Together, they had married couple had six children: John, Bruce, Roger, Liza, Andrew, and Anne, sixteen grandchildren and three great-grandchildren.

Moreover, Phyllis and Fred celebrated a successful marriage until the death of her husband Fred in 1993.

Phyllis Schlafly Kids: Where Are They?

Phyllis’s first-born John Schlafly followed his father’s footsteps and became a lawyer. In 1992, John revealed himself to be gay.

Her fifth child Andrew Schlafly is also a lawyer and creator of Conservapedia. He attended and graduated from Princeton with a degree in Electrical Engineering and computer science.

Likewise, her daughter Anne Schlafly Cori has taken the position of chairperson at Eagle Forum. She is married to Tom Cori, son of prestigious Nobel-prize winner Carl Cori and Gerty Cori.

Similarly, Roger Schlafly is a software developer residing in California. He earned her Ph.D. in mathematics from the University of California. He had worked as a designer of the air traffic controller system, and a senior mathematician at Information Security Corporation.

In the same way, Liza Schlafly Forshaw is also a real estate lawyer in St. Louis, Missouri. Moreover, she was married to Joseph Forshaw IV. She attended the University of Virginia and Washington University of Law to earn a degree in law.