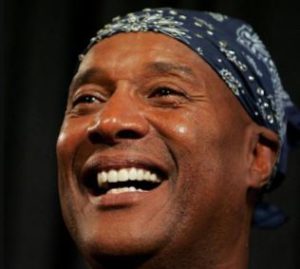 Paul Mooney passed away after suffering a heart attack on 19 May 2021. He died at his Oakland home. The legendary comedian was 79. He had reportedly been battling dementia for years.

In this piece, we look into Paul Mooney’s romantic relationships including his wife, girlfriends, and dating history. What’s more, it also tries to answer the questions about his sexuality.

Yvonne, if you don’t know, is an actress most cherished for her role in the 1977 film “Which Way Is Up?” In it, she played the character, Congregation Lady. Yvonne also appeared in The Richard Pryor TV Special as herself in the same year.

According to this IMDB, Yvonne was born Yvonne Carothers.

As a married couple, Paul and his wife, Yvonne celebrated their wedding anniversary on 19th January.

Paul’s marriage with Yvonne didn’t last forever. They would eventually divorce one another. Together, the couple went on to have one child.

Per sources online, Paul Mooney was a father of 5 kids. They are his sons Symeon, Daryl, Dwayne, Shane, and a daughter named Spring.

Unfortunately, in 2001, his son Symeon was murdered.

According to Live Ramp Up, Paul Mooney’s most recent girlfriend was Chaka Khan. The publication claims they were dating as latest as 2018.

On 2018 Valentine’s Day, Paul tweeted a photo of Chaka Khan sitting on his lap and wrote— “I’m having a fantastic evening @ChakaKhan each day is Valentine’s Day!”

Reportedly, on the very day, Paul addressed Chaka as his wife.

Also in 2018, Paul wished his alleged girlfriend, Chaka on her 65th birthday. What’s more, the comic also praised her presence and voice.

Over the year, the speculation intensified. Even actor Aries Spears claimed that Paul had some “sugary” moves.

The gay rumor was brought up in 2018 when legendary musician Quincy Jones said Richard Pryor and Marlon Brando were sexual partners. Hitting back at the comments, Paul tweeted— “Day 8 of the 28-day challenge is a legendary trio, my friend Richard Pryor, the great Marlon Brando, geniuses Marvin Gaye and Baldwin, getting too many calls from irrelevant, sick n thirsty gravediggers who’ll do/sell anything for a dime or relevance.”

According to Celebrity Net Worth, Paul Mooney enjoyed a $500K fortune.

Paul, who hailed from Shreveport, Louisiana, earned notoriety as Richard Pryor’s writer and features on Chappelle’s Show. Also, he contributed to Richard’s films Jo Jo Dancer, Your Life Is Calling.

As a vet, Paul gave several up-and-coming comics their first break. Some of them include  Robin Williams, Sandra Bernhard, Marsha Warfield, John Witherspoon, and Tim Reid.

According to his IMDB, Paul had 29 writing credits. Meanwhile, he had 21 acting credits including roles on “Judge Mooney,” and “Bamboozled”.

Paying homage, award-winning actress Viola Davis tweeted— “Awww… RIP comedy legend Paul Mooney! You were both funny and poignant. So happy to have witnessed your genius live. Rest well!!! Pour down some laughter here. We need it.”

Ron Funches also paid tribute to the comic, writing— “RIP to the legend “miss thang” Paul Mooney. I learned so much from you it was a weird but wonderful experience to meet you.”

Dionne Warwick tweeted— “My heartfelt condolences to the family of my dear friend Paul Mooney. He will be missed.”