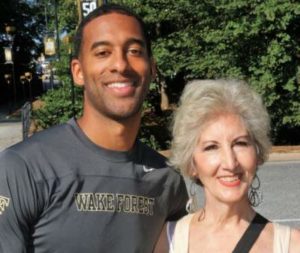 Meet Patty James, the matriarch of our favorite Matt James from the 25th season of The Bachelor.

After it was revealed in a February 2021 promo for the series that Patty was set to join Matt in Nemacolin to meet his finalists, viewers have been wanting to know her more.

And so, here’s this Patty James wiki about her Matt James’ mother.

mylife.com has it reported that Patty James reached the age of 67 in March 2020. Her birthday i.e. on the 27th of March makes her zodiac sign Aries.

Patty James continued to reside in her hometown of Raleigh, North Carolina. Word has it, her maiden name is Owen. And for some reasons she kept her ex-husband Manny James’ last name permanently. Anyway, she now writes her full name as Patty Cuculo James. She has two uncannily similar-looking sisters. (They can just as well pass for triplets.)

For her education, Patty attended North Carolina State University for her bachelor’s degree in Psychology. Later, she also went to Fonville Morisey School of Real Estate where she received her North Carolina Real Estate Broker’s License.

So, both Patty James and Matt James are Registered Republicans. And what’s more, Patty also followed Donald Trump on Instagram. So these are pointing towards the possibility that Patty is a Donald Trump supporter.

Patty clearly appears far younger than her real numbers. While blonde and light-skinned, she also seemingly had a good fashion sense.

Patty James was spotted active on Instagram and Facebook. Introducing herself as a Matt James mother on her social media bio, she often utilized the platforms for cheering on her kids.

While still in college, Patty worked on campus in the chemistry labs, at the DH Hill Library, and also worked part-time in clothing sales at Ellisbergs in Cameron Village. She seemed to have been always driven by her professional job while also balancing life as a single parent.

It was only later that Patty started her mainstream career as a realtor. In November 2014, Patty joined Daymark Realty LLC, a real estate company in her hometown. There she stayed employed as a real estate broker for almost two years.

Currently (in March 2021), Patty continued to be a full-time Home Sales Consultant at Lennar Homes Raleigh/Durham. She registered for the company in Oct. 2018. At the same time, her Facebook page also listed her as one of the members of Fendol Farms, a 55+ Active Adult Community-based in Lennar.

Talking about her net worth, Patty James reportedly hoarded an estimated $650 thousand fortune before early-2021. Further speculation can be drawn from an indeed.com report which estimated the average annual salary for a sales consultant in North Carolina as $63,581. Also, it reported the professionals in the field earned $24,000 commission every year.

Just as Matt James revealed on the Bachelor nations episodes, Patty James and now-former husband, Manny James were long ago divorced. And, Matt’s dad and Patty’s ex-spouse have never been in the family picture for Patty and her kids with him. They share two kids Matt and his older brother John James.

Patty has been vocal that she had to struggle financially while much younger Matt and John were growing up. No doubt, Matt wished a “Happy Fathers Day Mom” on a famous Insta-post from last year where he dubbed himself as “the fatherless”.

But the scenario might get a bit different once Matt James returns home choosing the best bride for him from the reality TV show. Not long ago, after receiving a genuine apology from his dad, Matt had sealed their estranged relationship with an “I forgive you. I’m not holding grudges. I want us to move forward.”

It seemed both Patty and Manny did not get married again and shared only two have two kids from their only biracial marriage.

It’s because Manny was cheating that Patty decided to leave him for good. 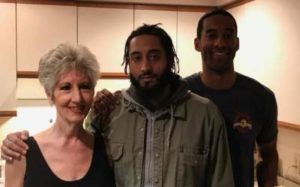 Anyway, today she is in a completely positive space, beyond elated for her sons. Matt joked on a June episode of The Bachelor: The Greatest Seasons — Ever how she was already hoping for a basketball team for grandkids.