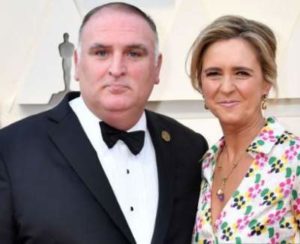 Celebrity chef José Andrés received a $100 million grant in a surprise announcement from none other than the American business emperor Jeff Bezos himself.

And while the congratulations are pouring for these leaders, honored for forever aiming high, here’s a Patricia Andrés Wiki covering all about José Andrés’s long-time wife Patricia Andrés.

Patricia’s maiden name is Patricia Fernandez de la Cruz. It seems she goes around by both her married and maiden name.

Until July 21, Patricia Andrés did not seem to be on social media or LinkedIn. Still, however, she occasionally featured on José Andrés Instagram @chefjoseandres (with 668k followers) and ‘José Andrés’ official Facebook page.

Other than that media also spotted her as her husband’s plus one at the 2018 Time 100 Gala – Red Carpet or 91st Annual Academy Awards – Arrivals.

José also occasionally came up with “The Chicken Experience” series on IG where he prepared food with his daughter Carlota and shared its recipes among his audience.

While in Washington, D.C., Patricia Andrés took some classes in English and went to Montgomery College. She also graduated from the University of Maryland University College. And so, when she was working for her embassy, in the commercial office, she met José and the rest is history.

Fast forward to 2021, one could not tell if she did any jobs. And while her net worth, at the time, also remained aloof, she was also entitled to her husband’s a-few-years-ago estimated $50 million net worth.

José, if you do not already know, is a Spanish-American chef, who is often credited for bringing the concept for small plates dining to America.

When And Where Did Patricia Andrés Met José Andrés?

Patricia dated her husband José Andrés for a year and a half before they married.

The two actually met in Washington. Patricia had come to Washington because her uncle used to work for the Spanish Embassy there. So, she planned to be there for six months, study some English, then goes back to her home. But she ended up staying more than she intended to and met José in the process.

“Someone could make a living picking up everything José loses”, says Patricia Andrés when referring to her husband’s forgetful nature. Patricia says José has been known to leave the house without his shoes on or misplace things, including his car.

Patricia, however, attaining her role of an organized and sensible person in the family takes care of all of it. Because she is aware of José has a lot on his mind — overseeing more than 30 restaurants nationwide and mobilizing disaster relief feeding efforts.

They got married in September 1995. Patricia’s dad had passed away in September a year before. So, they did a small wedding, which is Patricia’s words was “nice.” First, they had a civil marriage in the United States, and later they had gone to Spain for a religious and real wedding with friends and family.

Talking to Bethesda Magazine about raising their kids, cooking at home, and José’s crazy schedule, the couple shared — all three of their girls went to The Woods Academy in Bethesda. Ines and Lucia attended Stone Ridge School of the Sacred Heart, also in Bethesda. And Carlota, a 2017 Stone Ridge graduate, was a sophomore at New York University, at the time.

Also, at that point, the family lived in Bethesda, Maryland in a contemporary home with a comfortable and earthy interior. In the front yard, they grow their potatoes, carrots, cauliflower, and other produce in raised beds. They also do their own composting and had maintained two beehives.

When asked what it’s like to live with José who is always traveling for work, Patricia shared

That been said, Patricia is originally from Asturias in northwestern Spain while José is from Cadiz in the southwest.