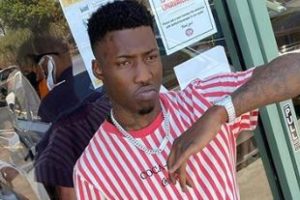 Ola Runt initially gained traction because of his remix to King Von’s “Crazy Story” tiled “Brazy Story”. He then gathered attention as an associate of Atlanta legend Gucci Mane.

Continue reading and delve into Ola Runt’s wiki. In the process, find out his real name, ethnicity, and height. Moreover, discover his parents, age, and songs.

Per his date of birth, Ola secured Cancer for a Zodiac sign.

Unsurprisingly, the “Osborne Flow” rapper wasn’t born with the real name Ola Runt. His parents had named his something else — info he refused to divulge.

While his stage name sounded very Nigerian, Ola didn’t seem to have connections with the African nation. What’s more, he once stated a friend gave him the moniker “Ola Runt”.

Reportedly, Ola owned African-American ethnicity. Likewise, on his music videos, he can be seen repping the Bloods.

Talking about his family, Ola described his parents as hustlers. Meanwhile, he labeled his grandad “vicious” who never held a steady job.

Growing up in Atlanta, Georgia, Ola fell into bad company at a young age. The street life eventually caught onto him.

As a result, by 8th grade, Ola had dropped out from high school. The decision infuritated his mother who empasized on the importance of education.

Many noted Ola’s menacing stare as the rapper’s standout feature.

Verified on Instagram, Ola flaunted 132 thousand followers on the platform. Likewise, he was also present on Facebook.

In June 2020, Ola went on a high speed police chase with police. His IG followers witnessed the entire debacle unfold on Live.

At 16, Ola Runt was arrested on the armed robbery charges. Then a judge slapped him with 5 years jail sentence.

Once out from the prison, Ola tried to get his life back on the track by working a regular job. He would eventually quit it and become active in the street.

Upon his father’s request, Ola decided to give music a shot. To his surprise, the reception and reactions on his songs were all positive.

After his songs “Brazy Story” and “Hush Mouth” went viral, Ola began creating a buzz. Fellow Atlanta rapper Lil Baby even reached out to him lauding his music.

When Ola linked with Gucci Mane, there were rumors of him signing to the “Freak Girl” rapper’s label 1017 Records.

When asked about his finances by Adam22 of No Jumper podcast in July 2020, Ola replied:

“I feel like I made it. Nowhere near done.”