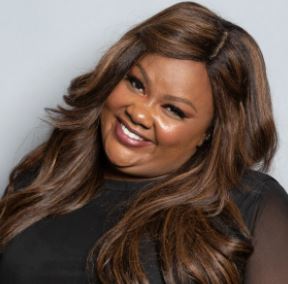 The actress, comedian, and TV host, Nicole Byer first came to the limelight starring in the series Girl Code and Loosely Exactly Nicole. Later, she then joined the Netflix reality bake-off show Nailed It! in 2018, and remained as its host ever since.

But while we know enough about her on-screen life, what was going on in her private world? Stick till the end of this article to learn all about her.

Nicole Byer lost both of her parents at an early age. Her mother, Lillie B. Byer died of a pulmonary embolism (a blood clot in her leg that traveled her heart) at the age of 54. She was an active church member and often helped Nicole with her school works. A native of Oxford, MS, Lillie was a University of Illinois graduate.

After six years of Lillie’s death, Nicole’s father Trevor C. Byer suffered a massive heart attack and joined his wife on June 10, 2008. He hailed from Barbados, attended the same university as his Lillie, and subsequently spent his entire career working at AT&T (for 31 years).

According to Nicole, she and her dad never really got along. “He truly didn’t understand any of the decisions I ever made”, she said.

As for Nicole’s siblings, she has an older sister named Katharine who worked as a teacher. They lived together alongside their dad, after Lillie’s death. The day, Nicole’s father passed away, it was Katharine who woke Nicole saying, “I think Daddy’s having a seizure.”

Trivia: Nicole and Katharine sold their dad’s house in the winter of 2020.

The 5’5” tall, Nailed It! Host, Nicole Byer was always a bigger woman and often joked about it. In 2018, after claiming she lost her weight, Nicole described herself as a “big b**ch”. However, as of 2021, she hasn’t reported any weight loss.

Apart from her jokes, Nicole was also a body confidence icon. She wasn’t afraid to show her unfiltered + sized body over IG. Rocking a black Calvin Klein underwear and sports bra set,  Nicole once uploaded an edited and unedited version of her picture with hashtag #Veryfatverybrave.

Taking her #VeryFat and #VeryBrave beyond Instagram, Nicole also wrote a book titled “#Veryfat #Verybrave: A Fat Girl’s Guide to Being Brave and Not a Dejected, Melancholy, Down in the Dumps, Weeping Fat Girl in a Bikini.”

As for her diet, Nicole ate a “typical breakfast” consisting of eggs, bacon, toast or bagels, and frittata. For lunch she ate, Nature Valley peanut cereal bar and a La Croix sparkling water. And for dinner, she would generally eat spaghetti or a chicken sandwich, cheese fries, or a caesar salad.

Go check Nicole’s site at “nicolebyerwastaken.com”, where she sold her merch that included tee shirt, phone case, tota, and hoodies. Also, you can buy her book and listen to her podcasts over there.

Though Nicole Byer may flaunt a lavish living now, she was in almost $30 thousand debt before her fame. Thus, she married an Indian man who was in urgent need of a green card then. However, Nicole didn’t use the money her husband gave her to pay her debts, rather she used them to attend comedy classes.

Nicole confessed that “it was a sham marriage”, and there was no love between her and her now-former husband.

Over one episode of Loosely Exactly Nicole, Nicole gets married to a man for money and he gets married to her for a green card — which was a real-life depiction of her over the screen. According to Nicole, she had “no shame” talking about it “because the statute of limitations was up”.

As of early 2021, Nicole Byer was single. She claimed that she had been since for decades. Some claimed Nicole used being single as her brand. Go follow her apple podcast titled “Why Won’t You Date Me? with Nicole Bye‪r‬” to learn more about her dating life.

Also, Nicole never talked about her boyfriend, except for the time when she pranked her followers on Twitter on April 1st, 2019. She wrote,

“Happy 2 day anniversary to my boyfriend. I #love you very much we’ve been through so little (cause we just started dating tee hee hee) but I’m sure our journey will be a #longone you are a bright star in my life and the lighter fluid to my fire. #love”

Is Nicole Byer Lesbian Or Bisexual?

Nicole Byer is neither a lesbian nor a bisexual. However, she also confessed that she doesn’t identify as straight!

Opening about her sexuality, Nicole labeled herself as a person who “just loves”.