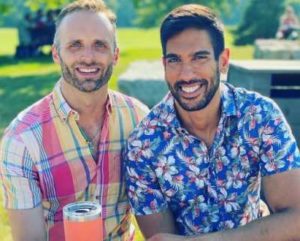 American reality television series Family Karma returned for Season 2 on Bravo on June 2, 2021. Featuring Amrita Ramakrishna, Brian Benni, Bali Chainani, Amrit Kapai, Dillon Patel, Monica Vaswani, Rishi Karam, Vishal Parvani, and Shaan Patel in the main cast, the docuseries also introduced to its viewers some guest appearances. Among them is Nicholas “Nick” Kouchoukos; bio and personal life of whom you may learn about in this writing.

Nicholas “Nick” Kouchoukos reached the age of 38 in 2021. Those who are born on June 24 in 1983, like Nicholas, have an astrological sign of Cancer.

Nicholas “Nick” Kouchoukos, with looks resembling British actor Andrew Lincoln, stands to a height that is above 5′ 11″ or 1.80 meters.

Until July 8, 2021, Nicholas Kouchoukos had 1,068 followers on his Instagram @njkouchoukos.

Nicholas was rarely active on his Twitter @nicokax where he had only 3 followers.

Meanwhile, Nicholas regularly gave updates from his life on Facebook.

Nicholas “Nick” Kouchoukos is a fifth-grade dual language teacher in Chicago public schools. So as a bilingual teacher in the Greater Chicago Area, he was supposed to earn an average salary of US $58,141 as per a glassdoor.com estimation.

In the past, Nicholas also worked as an audit lead at Northern Trust Corporation and as a risk consultant at Crowe Horwath LLP.

Nicholas Kouchoukos is not a full-time cast member of Family Karma. But then, he sure made some significant appearances on the show as Amrit Kapai’s beloved partner.

Just like the co-stars, Brian Benni and Monica Vaswani, Amrit Kapai was portrayed as someone who is very much committed to some outsiders from the Family Karma scene.

So, we came to know, he and Nicholas Kouchoukos have been dating for the better part of a decade. Amrit, who is an attorney by day and a lay enthusiast by night, even expressed his desire to get engaged to Nicholas on the national television show.

However, the viewers were yet unaware if or not the proposal already happened.

Lately, in the course of the Family Karma purple carpet premiere, Amrit explained to Showbiz Cheat Sheet that he and Nicholas were trying to make it work from a distance. They first began dating when Amrit was living in Chicago. But after Amrit’s law firm asked him to open an office in his native South Florida he moved back in with his parents.

“[Kouchoukos] is still in Chicago. It’s hard, it’s long-distance. But I split my time because of my main office in Chicago. So I go back and forth. I see him a decent amount.”

Then, not beating around the bush, he shared:

“I think he’s waiting for me to ask the big question before he makes a permanent move. So we’ll see. Time will tell.”

So, in the meantime, Nicholas continued to be a “Midwestern boy.”

Born in a small town in Michigan, Nicholas is not just different but the complete opposite of his partner Amrit. But still, they found reasons to stay together.

Only on June 3, 2021, Nicholas shared expressed how proud Nicholas felt for Amrit’s journey on Family Karma.

“Tune in to Season II of Family Karma tonight! What a ride it’s been. So proud of you, babe!”

The couple is not big on PDA and all, but they sure publicly talk about their affection for one another. Not long ago, on June 24, 2021, Amrit wished Nicholas the happiest birthday writing, “happy birthday, njk. thank you for being my better half.”

That been said, the couple owns a studio apartment in Miami. They are also the proud parents of their adorable golden pup Theo K. You may of course witness the parenting over Theo’s Instagram @lifeoftheok.