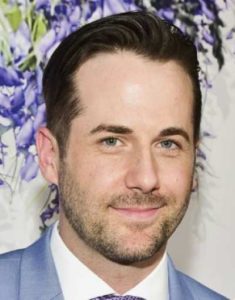 Niall Matter is an actor of dual nationality i.e. the Canadian and American. Most lately, he played the songwriter Grady Parker in the Hallmark Channel television film Country at Heart (also starring Jessy Schram).

He is, however, best known for his series regular role as bad-boy genius Zane Donovan in the American science-fiction series Eureka and as the lead Evan Cross in the short-lived 2012 series Primeval: New World.

Keep reading to learn the fascinating facts regarding his professional as well as personal life.

Born in the small-town Edmonton, Alberta, in Canda, Niall Matter, as prior mentioned, held dual nationality.

Regarding his ancestry, he is of Irish and Russian descent.

Niall’s parents, according to WHOTIMES, are named Arthur and Jennifer Matter.

He basically grew up on his parents’ dairy farm. He is a third-generation oil rigger, who worked on the oil rigs in Northern Alberta for eight years.

Before that happened, when he was 13, Niall enrolled in drama classes at the recommendation of a school teacher. But, after he got into some kind of trouble at age 17, his parents sent him for a three-month stint on the oil rigs to work with his grandfather.

He continued to work on the oil rigs alongside his grandfather and brother Trevor until the age of 25 (Niall also has a sister with the name Florence Matter). Soon, he relocated to Vancouver. There, he attended Vancouver Film School looking for a long-term career in acting.

How Tall Is Niall Matter?

Before he left his work on the oil rigs, Niall met with a serious accident. He was nearly crushed inside the cab of a 17-ton drilling rig. As a result, his quad muscle had been detached from his femur, and he nearly lost his right leg. It took him six months of extensive physiotherapy to fully regain his ability to walk.

Following his full recovery, Niall yet again returned to the oil rigs. Until he witnessed another accident in which a man lost both his legs and quit the job once and for all.

On returning to Vancouver, he first “lied” his way into a bartending job. In 2007, Niall landed his first professional acting job, playing the lead role of bait shop owner Josh Riley in the Syfy original film Loch Ness Terror.

The same year, he came across his first significant break, with the main role of bartender and cocaine addict, Trent Hamiltonin in the teen drama The Best Years.

In the following years, Niall did several TV shows including Warehouse 13, Melrose Place, 90210, When Calls the Heart, Th Good Doctor, Supernaturals, and more.

Also, he did a lot many Hallmark movies, including numerous Aurora Teagarden Mysteries films.

This way, the Frozen in Love performer Niall Matter pulled in around $1 million net worth, in recent times.

Circa July in 2016, Niall Matter married his girlfriend Sara Bradley in a private, Hawaii wedding, attended most probably by their family and friends. 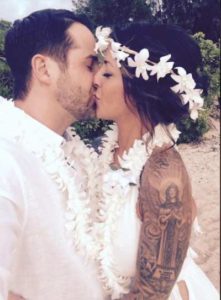 The bride and the groom! (PIC: Niall’s FB)

Not much is known about Sara who enjoys a very low profile except for a fact that she is gorgeous and has big, breathtaking tattoos on her left arm. Plus that she and Nial have two children, both girls. They are named Kate and Betsy Matter. 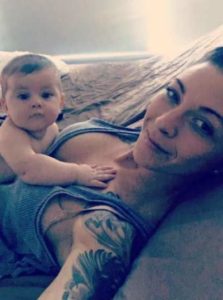 The eldest daughter, Kate, was born the same year, Niall and Sara walked down the wedding aisle and the younger one, Betsy, was born at some point in 2018.

Niall, who was brought up in a Christian household, probably also raised his children as Christians.

At the time of this writing, the family of four lived in resided in Los Angeles, California, the United States. While the fact is undiscovered if his wife and children also held Canadian-American nationality.

Niall, who found himself in the sixteen projects with the Crown media (in four years), credits his Hallmark to his girls and his dad-status. Because Hallmark, in the beginning, came around the time when he started his family.

Niall told MediaVillage that having kids really softened his heart and dealing with them and his wife, he dearly loves, he finds himself just in a different place in life. And, this is what adds funs to the roles he portrays. “These roles I get to play (of husband and father) … I get to live in that space”, he said.