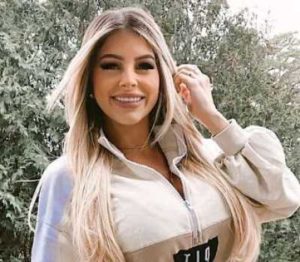 Kim Kardashian’s ex-husband Kris Humphries was spotted having the best of times at a luxury beachfront resort in Miami Beach with this gorgeous Instagram model, Neyleen Ashley. It was the first week of the new year 2021 when Kris was spotted with a possible new girlfriend.

Here’s everything you need to know about Neyleen.

Also known by the name Neybronjames, Neyleen Ashley held American nationality. So, might have acquired a Cuban-American ethnicity from her parents.

Her family (last) name is Calejo. While information surrounding her family and early life was missing, she had said sometime in the past that, “Sometimes home isn’t a place, it’s a person.”

Neyleen Ashley felt self-conscious before she went under the knife but later regretted the plastic surgery. Sharing her story she hopes to warn young women not to rush into the cosmetic surgery and to think carefully before you go for it.

When only 18, Neyleen had breast and butt augmentation and as time went on, she grew to “hate” them.

Because she was a promotional model at the time, Neyleen thought the surgery would give the confidence boost she needed and would make her less self-conscious.

She may regret it now. But, one must say, the multiple surgeries actually looked good on her “gym-honed physique and curvaceous derrière”. Tattooed here and there, Neyleen Ashley flaunted a 36DDD-24-36 frame. IMBD listed her height as 5′ 6″ (1.68 meters).

Neyleen engaged 2.1m followers on her Instagram (until Jan.9, 2021). Further, on Twitter, she had 16.6K people following her and it seemed her previous account on it was suspended.

In October 2019, she accused TikTok of “discriminating against her body’ after removing her videos because she’s “too sexy”. She said the app removed her clips, even when similar skits from other models remained online. “It makes me sad when they remove my videos”.

She said the censure felt more hurtful because TikTok had provided her with a psychological lifeline during the locked-inside pandemic days.

Neyleen Ashley is reportedly an aspiring actress known for taking the Internet and social media by storm in 2016.

Her first ventures in social media were doing funny videos on Vine. and o when Vine got shut down, she “quickly transferred talents to Instagram”.

Neyleen earned up to $1,000 per social media post and described. Still enrolled in nursing school, she had taken a break due to the COVID-19 pandemic. Thus, at the time, she described her job as– full-time Instagram model and Twitch streamer.

Twitch, if you never heard before, is an Amazon-owned live streaming service popular with video gamers and fans of esports.

This way, Neyleen Ashley had pulled in over $800 thousand until early 2021.

Neyleen Ashley & Kris Humphries: Dating, How Did They Meet?

Neyleen Ashley proudly posted some pictures from the Miami beachfront outing with Kris Humphries on her Instagram stories.

Although they never publicly acknowledged they were dating, several snaps from the sun-soaked getaway sure suggested otherwise. 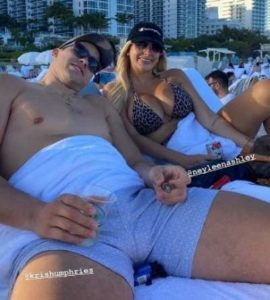 Neyleen Ashley and Kris Humphries looked relaxed as they spent the day with a group of friends (PIC: BACKGRID)

Posing for a few pictures sitting together on a lounge chair, Neyleen ensembled a leopard-print bikini top, a pair of black bottoms, and a Champion baseball cap.

Later in the evening, it seemed they partied even more. 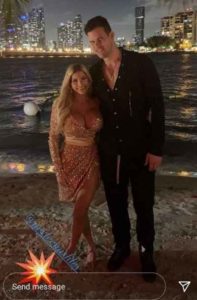 At the time, it was understandably too soon for the fans to be aware of their ‘how we meet’ story.

Neyleen ignited romance rumors with Chris sometime after she caught her former boyfriend cheating on her with prostitutes. This happened in late-2019. And she had met her then-boyfriend through mutual friends in 2016.

Until Neyleen opened about this, she had successfully kept his identity anonymous. She told Mirror everything about her relationship with the guy except for his name,

“Our relationship was always rocky. He never made me feel secure as a woman, or that I was worth anything. I figured dating a normal man from a small town that he would be in ‘awe’ of me, but he treated me like I was anyone else…”

A year before, she said she was learning to move on by truly looking at herself from the inside out.

While speaking of Chris, we all know, how his marriage with Kim Kardashian famously lasted only 72 days. The former couple started dating in October, got engaged in May 2011, and married on August 20, 2011. Later the $10 million nuptial was rumored as a publicity stunt for financial gain orchestrated unitedly by E! Entertainment, Kris, and Kim Kardashian.

Keeping up with the Kardashians fans saw everything including a lengthy legal battle that concluded over divorce settlement on June 3, 2013.