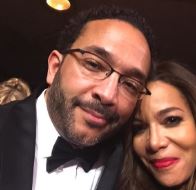 ABC’s The Host presenter Sunny Hostin lost her in-laws to Coronavirus in December of 2020. As reported, both of the parents of her husband worked as a physician.

As Sunny told, both of them took great precautions and still couldn’t fight the battle against the disease. And at this heartbreaking time, she has been strong support for her husband Emmanuel Hostin.

Scroll down, as this wiki focuses on the life and career of Emmanuel Hostin.

Emmanuel Hostin celebrates his birthday every year on 5 September. Born in 1970, he turned 50 years old while celebrating his birthday in 2020. Based on his precise date of birth, he owned Virgo as his zodiac sign.

Furthermore, Emmanuel’s father hailed from Haiti where he attended elementary and secondary school. However, when he moved to Madrid, Spain for completing medical school, he found his wife.

The couple married in Madrid in 1969 and had Emmanuel a year later. A year after having Emmanuel, the family moved to Queens, New York in 1971.

What’s more, Emmanuel’s two siblings, Carlos and Helen, were born after they moved to the states. Carlos married Casey Tierney and has a kid named Dyoe.

Emmanuel’s parents stayed happily married for 51 years until both of them succumbed their life to COVID-19.

What’s more, Emmanuel shares an uncanny resemblance to his father. He keeps short Afro hair and usually puts on glasses that accentuate his dashing appearance.

Emmanuel is a very private person as told by Sunny Hostin. He is not particularly active on social media but has created a few accounts on a few platforms including Facebook and Instagram.

However, his Instagram account earned a total of 250 followers as of Jan 2021. Likewise, he is also on Facebook but hasn’t posted on the platform for a very long time. But, Emmanuel is nowhere to be found on Twitter.

Before delving into Emmanuel’s job, let’s get familiar with his academic accomplishments. He attended and graduated from John Hopkins University School Of Medicine medical school in 1996.

He completed his residency in Orthopaedic Surgery from The John Hopkins University School of Medicine. In addition to that, Emmanuel earned his fellowship in Sports Medicine from Pennsylvania Hospital.

As of Jan 2021, Emmanuel is affiliated with medical facilities Mount Sinai West, Lenox Hill Hospital, and Rosevelt Hospital. He has over 25 years of experience in the medical field working as an Orthopedic Surgeon.

Besides, his career and job, Emmanuel gained wider fame as the husband of CNN legal analyst Sunny Hostin, but more on that later.

Meanwhile, Emmanuel Hostin sits on a total net worth of $8 million. He and his wife owned 1920s Tudor which was originally built for Governor Herbert H. Lehman. The 10-Bedroom, the 10-Bathroom estate is located in N.Y.

While speaking with Marie Claire, Sunny told the news outlet, she and her husband Emmanuel met each other in a church. As a Catholic, the couple committed to each other. And regardless of the commitment, they appear to be deeply in love with each other.

Moreover, Emmanuel and his wife tied knots on 8 August 1998. Following that, the in love pair have been happily married for a large period of time.

The married couple welcomed their Gabe in August of 2002 while they got the first-hand experience of parenthood. Four years later, the family welcomed another kid, their daughter Paloma.

Sunny, who was working in Washinton D.C., quit her job to settle in New York. Even though she was uncomfortable living as a housewife taking care of her kids, Sunny got used to that in no time. But the kids are all grown up following their own path to success and Sunny is actively pursuing her career as a TV host.

When asked the reason behind the success of the couple’s marriage, Sunny boasted that they are best friends first. Plus, the couple doesn’t believe in divorce.