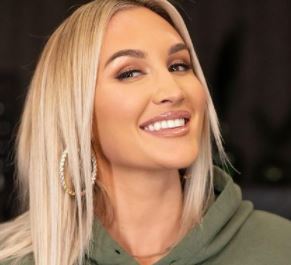 Days after the violence unfolded at the Capitol building in Jan 2021, the wife of Jason Aldean, Brittany Kerr took it to her Instagram story to support the rioters and claimed that they were actually representatives of “Philly Antifa”.

Though Instagram soon took down the post, fans who had seen the post were pretty upset about it and criticized Brittany for standing with the rioters. Moreover, things escalated when Brittany later dismayed in another post about censorship. She wrote,

“It’s getting so ridiculous the filters you put on everyone that’s against your narrative. It’s unbelievable and it’s ridiculous. It’s just really sad what this world’s coming to.”

Here is everything we know about her, presented in Wikipedia format.

As per her birthday, Brittany is of the Gemini zodiac.

From Charlotte, North Carolina, Brittany Kerr comes from a family of five; her parents named Donald and Debbie, and two siblings named Hunter and Kamden.

Also, Brittany had a grandfather who passed away before she could ever meet him. He was a veteran and Brittany’s parents often told stories about his “bravery, strength, humor and love for family.”

If you don’t know Brittany is also a formal NBA cheerleader. Apart from cheerleading, Brittany practiced martial arts and was even a first-degree black belt at that.

As for her political affiliations, Brittany is a republican. She was one of the most outspoken supporters of Donald Trump. According to her, she faced backlash for supporting the former president Donald Trump and speaking about the potential election fraud questioning Joe Biden’s eventual win.

Trivia: Brittany is an animal lover.

However, there were rumors that her “beauty” was enhanced. The gossips about Brittany going through plastic surgery was floating around, never to be proven.

Brittany Kerr held a stunning $10 million net worth in 2021. Moreover, she was also entitled to her husband Jason Aldean’s fortune of $80 million.

Now, one of the top Nashville, TN, based makeup artists Brittany however, started her career as a model, dancer, and singer. In 2010, she participated in a Victoria’s Secret Model Search contest and placed in the top 80. Then, she joined Charlotte Bobcats’ Lady Cats Dance Team from 2011 to 2012.

Finally, Brittany tried her luck in American Idol’s eleventh season. She auditioned with Joss Stone’s “Spoiled” and got 2 out of three “yes” from the judges. Though Brittany could only make it to the Hollywood round, the show’s connection allowed her to meet her future husband.

In 2021, apart from her job as a makeup artist, Brittany also owned her own clothing line. By then, she endorsed brands such as Timeless Organics Skin Care, Saaya Rose, Legoe Heritage, Care Of Vitamins, Rocksbox, Fab Fit Fun, Bombay Hair, and many more.

In 2012, while Jason Aldean was in the 11th year of his marriage with Jessica Ussery, there appeared Brittany Kerr, in photographs; rumored to be dating the country singer.

However, Jason was still treading a thin line with his first wife then. But in 2012, as the duo filed for a divorce and made their separated ways, Brittany was officially recognized as girlfriend to Jason.

Two years later, Brittany and Jason got engaged in 2014 and tied the knot the following year, on March 21, 2015. The wedding was held in Mexico and was attended by all friends and family including Jason’s two daughters from Jessica, Keeley, and Kendyl.

As of 2021, the duo was happier than ever. They share two kids: 7-year-old son Memphis and 6-year-old daughter Navy. Also, the family often joined Jason for his tours.