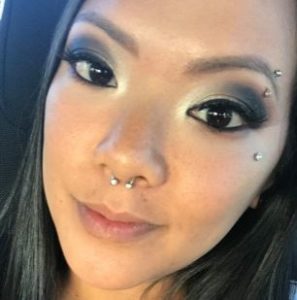 Meet Neslie Ricasa, former to-be wife of the 2021 Nathan’s Famous Hot Dog-Eating Contest champion Joey Chestnut. The world first came to know of Neslie after Joey took her to Nathan’s stage, asking her to be his future wife.

But who is she? Join us along with this Neslie Ricasa Wikipedia and enlighten yourself.

The two stumbled upon each other, thanks to their common passion “competitive eating,” and not soon after, they embarked on their romantic journey. Then on the fourth of July, 2014, just a moment before Nathan’s Famous Hot Dog-Eating Contest began Joey called Neslie to the stage, pulled out a ring, and bent his knee.

“Baby, these have been the best three years of my life, and I can’t live without you,” Joey told her, as the crowd cheered. “You make me better. Will you marry me?”, Joey proposed.

Unfortunately, Neslie and Chestnut’s plan to get married exactly a year later (i.e. in July 2015) never came to pass. They broke up that April, just a few weeks before their wedding date.

According to Joey, his competition schedule put a strain on the relationship. So, they decided to mutually end their relationship. “It just didn’t work. I definitely would say it was traveling. I was gone quite a bit,” he said.

After the split, Joey then went on to date a woman named Brie.

According to her Facebook, Neslie started dating Drew after January 16, 2017.

We guess that Neslie first met Drew at their work at the Star Elevator. It seems that Neslie joined the company in back Feb 2015 (months after her split with Joey) where drew was already employed as an elevator mechanic for over 5 years.

As of 2021, the couple was happily married and lived in San Jose, California with their beautiful two kids. They welcomed their first child in 2020 and their second-born a year later. 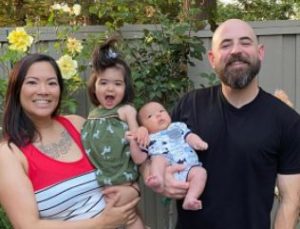 Neslie Ricasa with her husband, Drew Ely, and their kids (Source: Facebook)

Little info about her husband: Drew is Fremont, California native who went on to build his career as an Electronics Mechanic. As of 2021, he was working as an elevator mechanic at the Star Elevator for over 13 years. However, he previously also worked as a courtesy clerk at Safeway as well.

Corresponding to her birthday, Neslie is of the Leo zodiac.

Neslie Ricasa stands tall at a height of around 5 feet 4 inches (162 cm). If you have seen her together with Joey, she is much shorter than the gobbling 6 feet 1 inch (185 cm) champion.

Mentioning her distinct features, Neslie has bark eyes, a triangular face, and piercings on eyebrows, cheek, and under-nose. Also, Neslie has a board tattoo over her chest.

Like Joey, his former fiancee Neslie Ricasa flaunts the American nationality. She was reportedly born in Alameda, CA where she graduated from high school. Later, she then went on to join the San Jose State University in San Jose, CA for her Bachelor in Accounting degree.

By July 2021, Neslie entertained 192 followers over her Instagram @nes1337. Her posts majorly featured her cute white german shepherd named “Mr. Thornington”, and only a very few featured herself.

As for her Facebook, after her marriage with Drew Ely, Neslie created a new account @nesliehax with an account name “Neslie Ely (Ricasa)”. Her bio wrote, “turning heads without raising eyebrows.”

A competitive eater herself, Neslie has a personal best record of eating 14 hot dogs and buns on the main stage at Coney in 2013. Later that year she also went on to eat 59 dumplings in 10 minutes at the Day-Lee Foods World Gyoza Eating Championship. It was her first participation at a non-HDB discipline competition.

Since Neslie couldn’t make living out of competitive eating, she took on jobs as an accounting assistant at EK Health Serives, Inc, and Star Elevator after 2014. Finally, she found a perfect job as a financing analyst at Thomas Foods International, the USA in 2016, and was working there as of 2021.

Just in case you are curious, a financial analyst in CA made around $75 thousand per annum in 2021.