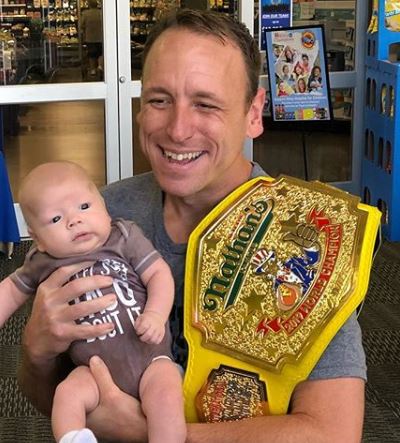 Gobbling down 75 Hot Dogs in 10 minutes, Joey Chestnut emerged victorious in Nathan’s Famous Hot Dog-Eating Contest 2020. While the rest of the participants struggled around the mark of 40 Hot Dogs, this undisputed king has remained the king for the past few competitions.

Joey had won the Mustard Yellow Belt for the 13th time in the past 14 years. That one time Joey lost was due to disqualification — he couldn’t make it to the event due to travel restrictions.

Learn more about Joey Chestnut’s life story outside the food world. Also, get to know about his parents and girlfriends as the article continues.

Holding over 50 world records, the competitive eater, Joey defines himself as “a goofy dude that loves to eat, compete, and travel.” He earned his nickname “Jaws” from a fellow competitive eater Sonya “The Black Widow” Thomas.

Joey Chestnut was born to parents — father, Merlin Chestnut, and mother, Alicia Chestnut. Reportedly, Joey’s parents were separated while he was just 2 years old. He was raised alone by his mother after his father left.

A family of six siblings, Joey has 3 brothers and 2 sisters. Also, it was his younger brother who chose this part for him. Joey was signed up for a lobster-eating contest in Reno, Nev., in 2005 by his brother. He didn’t win the event but walked away craving for more.

You may like – Mickey Madden Girlfriend, Net Worth, Wife, Height, Family

So how was Joey Chestnut able to win all those competitions leaving his fellow competitors in the dust.

Joey mentioned that he trained a lot for him to be able to eat 70+ hotdogs in 10 mins. In 2018, he had a training routing that began in May and slowly got more and more intense over the weeks. He shared,

“There’s a week and a half between my first practice and my second. I’m just trying to get my body used to pushing it in that fashion. Toward the end, I’m doing a practice every six days, and I’m on an absolutely strict diet making sure that I’m getting back to my target weight before I do another practice.”

Moreover, Joey’s eating record is spread over a variety of different foods with different textures, flavor profiles, and nutritional compositions. Mentioning some of them are —Nathan’s hot dogs: 74 dogs and buns in 10 minutes, Hard-boiled eggs: 141 in 8 minutes, Glazed donuts: 55 in 8 minutes. Pulled pork sandwiches: 45 in 10 minutes and many more

While Joey earned about $150,000 in 2009 from eating events alone (excluding sponsorship and other TV appearance), he did have other jobs too.

He studied engineering at the San Jose State University in San Jose, California, and focused his career in construction and civil engineering. But working part-time construction jobs here and there, Joey’s primary source of income became competitive eating.

As of 2020, Joey didn’t seem to be involved with any major construction jobs. Maybe he has put his engineering career on hold as reigning over the competitive eating paid him more than his basic salary.

Furthermore, Joey Chestnut’s net worth was estimated to be 1.5 million in mid-2020.

Joey Chestnut was engaged to Neslie Ricasa who is a competitive eater too. Though she wasn’t much of an eater like Joey, she has made several appearances eating at the Nathan’s Famous hot dog eating contest.

On July 4, 2014, Joey was on his knee asking his then-girlfriend, Neslie to marry him. The proposal was made on the stage of the Nathan’s Famous Hot Dog eating competition.

Unfortunately, Joey’s dream of talking Neslie as his wife came to an end, 9 months after their engagement. Their split was only a week before their scheduled wedding on May 9, 2015.

After separation from his ex-fiancee Leslie, Joey claimed that the split gave him “more reason to focus on the competition”. He added

“I definitely would say it was traveling, I was gone quite a bit. It was mutual, it just didn’t work.” 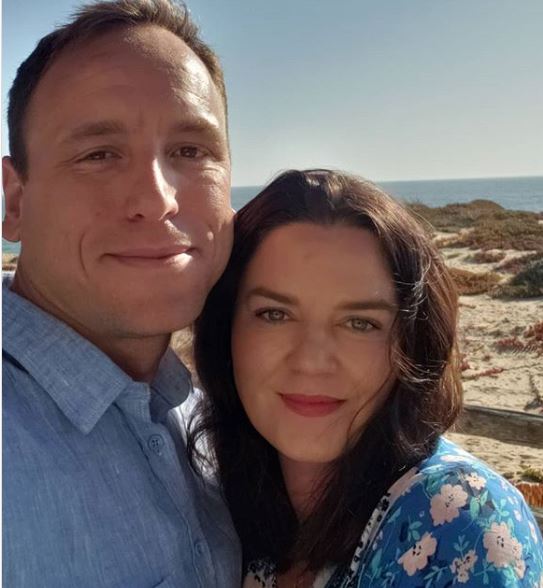 As of 2020, Joey Chestnut was dating Brie. The couple first appeared over Joey’s Instagram in mid-2019. Furthermore, Joey sharted that he felt guilty for asking his girlfriend, Brie to take care of Thorn while he went traveling and eating.