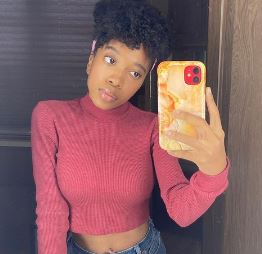 Hailing out of New York, Nathanya Alexander is an actress who found success on screen in a very short time. However, she has plenty of experience in theatre that helped build an attractive resume for her.

Nathanya Alexander was 23 years old as of March 2021. A few entertainment news outlets noted, she was born in January.

Nathanya Alexander was born to her anonymous parents in Brooklyn, the United States. To talk about her parents, her father and mother hailed from Trinidad and Tobago and immigrated to New York.

As Nathanya revealed in an interview, her mother was a thrift store owner. Besides that, no further information on his parents and siblings surfaced as of this writing.

More on her family: Nathanya’s grandmother Lucile Alexander was the first Trinidadian woman to dance The Limbo internationally. As Nathanya explained, Lucile was a boss lady and built a legacy for others to catch up to.

Lucile was best known as ‘Madame Bombshell’ who immigrated to the states in 1967. Nathanya inherited the love for Trinidadian culture from her family that included her grandmother.

Talking about Nathanya’s education, she is a Fiorello H. LaGuardia High School of Music, Art, and Performing Arts alumni. Furthermore, she revisited the school on several occasions to talk to the budding actor in the school.

On top of that, Nathanya also received a scholarship from Actor’s Equity Foundation during her time as a graduating senior in high school. She was selected by a panel of teachers headed by Sandra Faison, the school department’s chair.

Talking about the physical attributes of Nathanya Alexander, she stood tall at a height of 4 feet 11 inches (1.49 meters). Nevertheless, her extreme talent made casting directors overlook her height.

Moreover, Nathanya only weighed 46 kilograms (101 lbs) based on her below-average height. On top of that, she has brown eyes, long dark brown Afro hair.

Talking with unefillemorderne.blogspot.com, Nathanya shared she owns versatile style. This is highly influenced by her career as an actress. One day she dresses like a tomboy while the other time, she loves dressing like a girly girl. Whatever she decides to put on represents power and her wardrobe is gaudy and stylish.

Nathanya started acting at the tender age of 12 when she was just a kid. She started in a community theatre program where she discovered her love for acting. Later, her time in LaGuardia further helped her cement the immense love for the art of acting.

While in LaGuardia, Nathanya learned Shakespeare, character development, how to break down a script, on-camera techniques, voice & movement, musical theatre, how to perform on stage, theatre management, working behind the scenes, dance: jazz, tap, among other things, and many more.

During her time in theatre, Nathanya appeared in the plays such as The Wiz, The Mountaintop, Fame, Tribute Day, For Colored Girls, The Crowd, and Compleat Females Stage Beauty. Whereas, she made an on-screen appearance with minor roles in Taking Chance (2014) and Real New York City Mugging (2014).

Nathanya Alexander is an undoubtedly attractive lady with style and glamour oozing out of her. So, no question arises whether she captured the attention of plenty of men in the process or not.

The Brooklyn-based actress loved keeping details on her dating life private. And along with details on her family members, she also hid information related to her romantic endavours.

So, does Nathanya Alexander have a boyfriend? We are yet to uncover details on that front of her life as of 2021. She appeared alongside a man on her Instagram but there were no details on whether she was dating him or not.