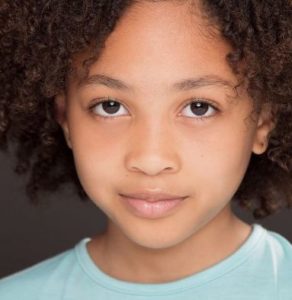 Naledi Murray is a New York-based actress who is best known for starring as Luna in the TV show Tommy. She appears on a Netflix show Sweet Tooth where she plays the role of Wendy. While her thriving career is clear as a crystal, her personal life is a matter of concern to many.

So, scroll down this Naledi Murray Wiki where we learn about details related to her parents, siblings, age, ethnicity, and other things.

“Happy birthday to our sweet girl Naledi!!!! Double digits baby! May you continue to be the inquisitive, wide-eyed, pure spirit that you are. I love you, sweetheart!!!” A birthday wish Naledi received from her mother on 8 November 2020. From this, we can learn that Naledi Murray turned 10 years old in November of 2020. She celebrates her birthday every year on 7 November that made her a Scorpio by zodiac sign.

Naledi Makel Murray was born to her father Malcolm Murray and her mother Micole Aubertin Murray in the United States. Her parents celebrated the 14th anniversary of their marriage in August of 2020.

Talking about Naledi’s parents, her father Malcolm worked as an actor and stunt trigger, and stunt double on several movies and TV shows. Shanghai Hotel, American Gangster, Gotham, Blue Bloods, Venom, The Enemy Within, The Blacklist, Sweet Tooth, Power, Run All Night, Daredevil, Luke Cage, and The Deuce is likely to nominate as his best work. He received a total of 38 credits for stunts and 14 for acting.

Coming to details on Naledi’s mother, Micole is a dancer by profession. She danced live at the Cultural Icons Series of the Saint Lucia Jazz & Arts Festival 2016. She trained herself as a dancer in Les Enfants Dance Company.

As far as we know, Naledi Murray doesn’t have any siblings as of early June 2021.

Naledi Murray is of mixed-ethnicity and rich in heritage. Her father is of Asian-African ethnicity. Whereas, her mother grew up in Saint Lucia making her of Caribbean descent.

The New York-based actress is not very active on social media. In fact, Naledi Murray has an Instagram account that is managed by her parents. Moreover, the platform garnered 351 followers in total as of May 2021.

To start with the actress’s fortune, Naledi Murray sits with a net worth under $100 thousand.

As both of Naledi’s parents worked in the entertainment industry, it became easier for Naledi to have a career in acting. So, her pursuing acting as a career shouldn’t be a surprise. However, it remains obscure how she made her start. But, we assume her parents found her an agent who got her into auditions.

Furthermore, Naledi trained and was represented by L’il Angels Unlimited, a child talent management company. In 2018, the actress landed the part of Tasha in Seven Seconds, a TV mini-series.

Then Naledi secured a minor role in The Land of Steady Habits in the same year. This was followed by her portraying Dee in Division Street. Finally, she landed the recurring role in the TV show titled First Wives Club where she appeared in four episodes in 2019. Then, she landed the role of Maddie in All Hail Beth.

Her Role On Sweet Tooth

The TV show Sweet Tooth is an adapted Netflix show from a comic book of the same name written and drawn by Canadian Jeff Lemire. The show was created by Jim Mickle for Netflix which premiered on 4 June 2021. In the show, the Naledi is playing the role of Wendy, a hybrid who had a mixed feature of a human and a pig.