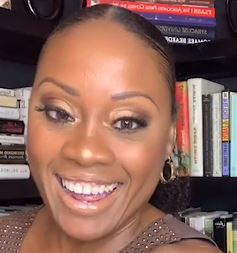 On 7th April 2021, news broke that Midwin Charles had passed away. She had soared to popularity as a legal commentator and analyst on the news network CNN.

Read this Midwin Charles bio and discover info about her husband, family, and cause of death. Furthermore, find out her net worth, career, and ethnicity.

Midwin Charles Cause Of Death

Via her social media, the family of Midwin Charles revealed the tragic news. At the time, the statement didn’t give out the cause of death.

The statement began— “It is with a profoundly heavy heart and the deepest sadness that we announce the untimely passing of our beloved Midwin Charles.”

The post then continued— “She was known to many as a legal commentator on television but to us, she was a devoted daughter, sister, aunt, niece, and cousin. Our lives are forever changed and we will miss her for a lifetime.

Concluding the statement were the words— “The family thanks you in advance for your love and prayers. Please allow the family time to grieve.”

On 19th March 2021, Midwin had canceled that week’s episode of “Happy Hour Tonight” because she wasn’t feeling well. She then said she would be returning the next Friday.

Replying to the tweet sent out by the family of Midwin, Exavier Pope wrote— “Midwin, you were brilliant, fierce lawyer & analyst as well as a funny and warm soul. The law & legal analyst community will miss you like your family, friends, and all the lives you touched. This is the last time we saw each other in March 2019 doing @karenhuntershow @SXMUrbanView.”

Sunny Hostin, The View co-host, tweeted— “Midwin was my friend. We worked together on In Session/Court TV. She was a brilliant beautiful legal mind. I will miss her and am praying for her family and especially for her mother whom she adored and spoke of so often. Rest my dear friend.”

Also, popular podcaster Sylvia K. Alston tweeted— “Midwin Charles was a colleague, a friend, and a frequent contributor to my show #NextNation. Learning tonight of her untimely passing stopped me in my tracks. My deepest condolences to her family and all who experienced her gift. She was a beacon for justice.”

A native of Brooklyn, New York, Midwin Charles had Haitian-American ethnicity. Also, she was a revered individual among the Haitian community living in the United States.

Midwin was born to her father and a mother named Antonia. Meanwhile, she was siblings with a sister named Mitzie. A graduate of New York University, Mitzie was working at NBCUniversal Media, LLC in 2021. She previously enjoyed stints at Lionsgate, Dreamworks Animation, Merril Corporation, Deutsche Bank, and Plus Media.

At the time of her death in 2021, Midwin had 14.9 thousand Instagram followers. Meanwhile, around 55.7 thousand people followed his Twitter profile. She had joined the platform in May 2009.

From her career, Midwin Charles reportedly pocketed more than $0.5 million in net worth. Meanwhile, some online outlets noted her fortune much more than that.

Midwin began her career working as the Law Clerk to Honorable Eric L. Clay for the United States Court of Appeals for the Sixth Circuit. There, she was responsible for writing memoranda and draft opinions for cases pending before the U.S. Court of Appeals for the Sixth Circuit based upon oral arguments, briefs of counsel, and independent legal research. Advised judge as to the proper disposition of cases.

Between April 2000 and September 2000, Midwin was an A. Leon Higginbotham Research Fellow for Prof. Charles J. Ogletree Jr. at Harvard Law School.

For 6 years, from September 2000 until July 2006, Midwin worked as a Senior Litigation Associate at Fried Frank Harris Shriver & Jacobson LLP. She also served as the CNN Legal Contributor for In Session on Tru TV (formerly Court TV).

At the time of her death, Midwin held several titles including Managing Principal At Midwin Charles & Associates LLC, Contributor for Essence Magazine, Guest Host for the radio show called Express Yourself, and Legal Analyst for news networks like CNN, MSNBC, The Fox Business Network, and more.

In 1995, Midwin attained her Bachelor Of Arts in International Relations & African American Studies from Syracuse University. She then earned her JD from American University, Washington College of Law.

Midwin Charles was survived by neither a husband nor a boyfriend. What’s more, she didn’t leave behind any kids. Safe to conclude, Midwin always prioritized her career over her dating life.

0 Replies to “Midwin Charles Bio: Husband, Family, Cause Of Death”