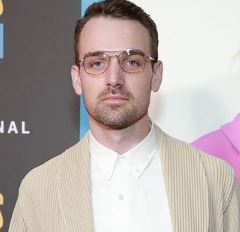 Micah Stock is the star of many TV shows and movies but he gained a wider audience after he starred on a Netflix’s web-series titled Bonding. He played one of the lead protagonists on the show and earned favorable reviews from the show.

Micah Stock was born on 31 December 1988. He celebrated his birthday turning 32 years old in December 2020. Per his date of birth, Micah Stock secured Capricorn as his zodiac sign.

Micah Stock was born to his father Richard Douglas Stock and mother Barbara Heroy Stock in Dayton, Ohio. Besides the names, no other info regarding parents surfaced as of this writing. But in a tweet dated 13 August 2020, he expressed his gratitude to his father for letting him be as he is and fully express himself. Moreover, his mother has also been interviewed in a podcast titled @wecalledyourmom with his teenage crush Beth Stelling and her mom Diane.

More about his family: Micah is of mixed ethnicity, mostly English and German. His maternal grandfather is William Bayard Heroy and his maternal grandmother is Dorothy Marie Menicke who is the daughter of German immigrants. His grandparents were high school sweethearts who met in White Plains High School. Sadly, Dorothy passed away on 9 November 2012 at Miami Valley Hospital in Dayton, Ohio.

To unfold details on his siblings, Micah Stock has a sister named Rachel Mallory Stock. He is also the best friend of Chris Perfetti.

Talking about the physical build of Micah Stock, the handsome hunk stands tall at a height of 6 feet 3 inches (1.91 meters). In the same way, he weighed about 76 kilograms (167 lbs) at the time of this writing.

Coming to Micah’s social media reach, his Instagram account garnered 8320 followers which are verified. He made only 44 posts in total as of this writing that contained his private life and professional endeavors. In the same way, Micah also has a Twitter account with 360 followers at the same time around.

Micah Stock underwent a fair share of struggle to make it as an actor like any other guy trying to pursue the career path. To sustain himself in the city of New York, Brooklyn to be exact, where he moved in 2011, he supported his career working several odd jobs. During his time as a struggling actor, he did the paperwork for friends of his friends. He also did a brief stint as a babysitter and worked as a waiter.

While Micah actively submitted a resume in one audition to another audition, he lived in Crown Heights. As he noted, he was present in over 300 auditions. He appeared on off-broadway productions to further polish his skills as an actor. When the news of being on And Away We Go at the Pearl Theatre Company on Manhattan’s West Side was heard he had little hopes of getting the part. But contrary to his belief, he got it anyway a few weeks after the audition.

Micah is best known for It’s Only a Play, a Broadway Revival of Terrence McNally. Furthermore, he has been nominated for Tony Awards.

Based on his IMDB, Micah made an onscreen appearance in 2011 when he starred in Pan Am as Lareau. Furthermore, he landed a minor role in Law & Order: Special Victims Unit (2012).

For a childhood friend and interviewer of The Closet Interview, he resembled a veteran actor Bill Murray. And he took the comparison as a huge compliment. Talking about inspiration, Micah cited Christopher Guest, Mike Leigh, Lynn Shelton as his biggest inspirations.

As for education, Micah attended and graduated from the Purchase College State University of New York, Conservatory of Theatre Arts. By 2021, he sits on a total net worth of $1 million.

While not working in movies, he participates actively in social causes. He is a huge supporter of The BLM Movement where he raised his voice for Ahmaud Arbery, Breonna Taylor, and George Floyd.

The Bonding star found himself in a dating rumor with several contemporaries of his. Among those that caught the attention of his fans was actress Sheila Vand. He and Sheila attended the Tribeca Film Festival screening on 22 April 2018 in New York City for We The Animals.

However, the nature of their relationship was unclear at the time. After the smoke settled, the couple never appeared together in public, leaving people wondering if they ever dated or not.

While Micah Stock’s dating status remained obscure, Sheila found herself a musician partner who managed a bunch of bands. This was one of the reasons why Sheila knew more about music than her own film industry.

While the real-life romance of Micah Stock remains a mystery, he could be seen perfecting chemistry with his on-screen girlfriend Zoe Levin on Netflix’s Bonding.

With all the information fans didn’t hesitate to put two and two together. Some even made assumptions that Micah could actually be gay.

Plus Micah Stock portraying a character named Seth in the movie Brittany Runs A Marathon convinced them that he is gay for sure. But just because a character that an actor plays is gay doesn’t mean, the actor is also gay.

In fact, Micah never addressed the gay rumor and avoided all the commotion and drama on the internet. But talking about his character in the movie, he explained that Seth isn’t a stereotyped member of the  LGBTQ community.

Micah also talked about the character’s goals and dreams that he has to pursue but still found time to support people around him.