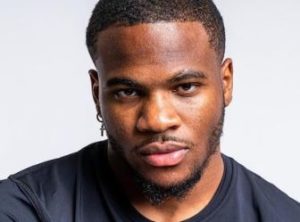 The 2021 NFL Draft is here, and our favorite linebacker Micah Parsons was selected by Dallas Cowboys who traded their 10th pick within the NFC East to the Philadelphia Eagles.

In 2020, Micah unexpectedly opted out of the season to take care of his son. For which, he was praised by many, but he also received a fair share of controversy for that matter.

So, we know enough about Micah’s feats, what remains unknown is the details about his baby mama. Was she his wife or girlfriend or just a random fling? Stay till the end to get all the answers.

Micah Parsons’s salary after signing a 4-year contract with the Dallas Cowboys would be $17 million. Also, he would receive a $9.7 million signing bonus, with a 3.1M cap hit for the year 2021

Furthermore, Micah would be prompted to stay the 5-year with the team (Dallas Cowboys will likely hold that option).

As of 2021, Micah was represented by David Mulugheta and Andre Odom.

The NFL football player, Micah Parsons garnered a net worth of over $10 million by 2021.

Micah Parsons was born on May 26, 1999, in Harrisburg, Pennsylvania. That made him 21 years of age in 2021 as he was drafted by the Dallas Cowboys.

Sherese and Terrence Parsons are the proud parents of the star linebacker Micah Parsons.

Trivia: His mother Sherese (maiden name “Sherese Mcdonald”), flaunting her son’s achievement, took it to her FB to the NFL news on April 30, 2021.

Micah Parsons has two siblings — a brother Terrence, and a sister named Shatara.

His sister, Shatara is a model and a retired basketball player turned coach. She played forward for the Central Dauphin high school and was selected D2CCA Third-Team All-American. After retirement, she went on to work in athletic promotions and was working as a YMCA Mentor and Teacher in 2021.

As for Micah’s brother Terrence, he lived a happy married life with two sons. He was a Madden Streamer who streamed over Youtube and Twitch. Like his brother, Terrence is a football fan and was there with Micah at the 2021 draft night.

The 6’2″ linebacker, Micah started his freshman season in 2018 playing for the Penn State Nittany Lions. Then in 2019, he was named Consensus All-American by the NCAA as he entered his sophomore season.

Before joining college (where he was majoring in criminology), Micah flaunted an impressive record at Harrisburg High School and Central Dauphin High School. Reportedly, he garnered the 2017 Mini Maxwell Award honors from the Maxwell Football Club, got named team MVP twice — registered 55 tackles, 10.5 sacks, and 17.5 TFL on defense while adding 1,239 rushing yards, 99 receiving yards, and 29 offensive touchdowns on offense as a senior.

If you are wondering why Micah changed high school, it was because of his mother’s work. According to him, his mom moved five times growing up.

Did you know: Micah was a better wrestler than a football player. Due to his above-average size, he dominated the high school tournaments when he was little.

Micah Parsons announced the birth of his son named Malcolm back on May 1, 2018. At the time, he had just enrolled in Penn State University and was considered one of the country’s top college football players.

As of 2021, with his son turning 3, Micah started introducing Malcolm more on his socials. The last we checked, Micah filled his IG with pictures of his son in a football jersey. Maybe the linebacker is hoping that someday his son will follow in his footsteps. 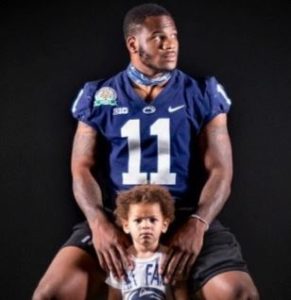 According to Micah, he wants to set an example for his son. He shared “having a son changes you,” and mentioned that it shifted his priorities. Although he wanted to continue reaching his dreams of being a top NFL player, Micah hinted that he would give it up any day for his son.

So, who is the baby mama to his precious son? Well, as of April 2021, Micah had yet to talk about his girlfriend (who is also his baby mama). However, it seems that the two are not together anymore. Over IG (dated Nov 2020), Micah uploaded a picture with his kid and wrote,

“It’s us against the world and Ima always make sure we Gucci.”

Also, at the time, Micah wasn’t married yet. So, they would rule out the possibility of his baby mama being his wife.

Just around the time Micah had a son with his then-girlfriend, he was also dealing with a college scandal. Allegedly, Micah physically assaulted and sexually harassed Isaiah Humphries, for which he was placed on probation.

As per Isaiah, Micah intentionally poured water over his head, and he retaliated by Gatorade over Micah. Then, Micah allegedly threw a punch at Isaiah, and “in an act of self-defense”, Isaiah pulled out a knife and stopped him.

Later, Isaiah reported the incident — put Micah on probation — but the bullying didn’t stop there. According to him, three other players took Micah’s place and “sexually, physically, and emotionally” harassed him.

In the end, Isaiah eventually transferred out of Penn State after 2018.