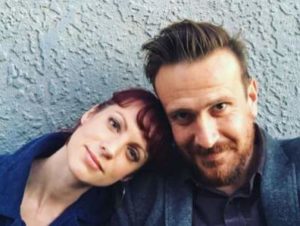 So, How I Met Your Mother’s Marshall Eriksen i.e. actor-comedian Jason Segel has parted ways with his girlfriend of eight years: Alexis Mixter. So what exactly was the cause of which the pair called off their partnership that they themselves admitted was so full of life?

Keep reading and find out!

Here, in this Alexis Mixter wiki to know her side of the story to the breakup.

On Dec. 21, 2019, as Alexis celebrated her 41st birthday, she had taken to Instagram to loving write about Jason as:

“Today I’m 41. But honestly, my birthday really changed 6 years ago when I met this guy. Now, each year, I get to celebrate US and what an incredible gift our relationship has been.”

Anyway, the next year, Alexis Mixter reached the age of 42. She has less than a year age gap with Jason who turned 41 in Jan. 2021.

So, among them is her mother Charlene A. Mixter, and father Daniel (Dan) Mixter.

Alexis is beyond grateful and proud that her young single lady brought her into the world and taught her all ways to live a beautiful life “filled with so much love, creativity, and support.”

While she did not know about her biological father Jim until she was in her late 20s. About meeting him, she wrote:

“Finally meeting him was like meeting a version of myself that was so similar in some ways and so drastically different in others. It wasn’t an easy relationship but we shared some truly amazing moments that are bold highlights in the timeline of my life.”

So, we learned Dan actually is her stepdad although she would not refer him otherwise but ‘dad’. Possibly on Father’s Day, she composed this for Dan on her timeline:

“Dear dad, Thanks for letting me choose you over 39 years ago (I still believe I did). Thanks for sticking it out with me through all the tough years. And, thanks for teaching me what’s funny in this world even if nobody besides us understands. I love you! ❤️”

Alexis is originally from New England, Northeastern United States. She relocated to New York City in 2001 and Southern California in 2009. She continued to live there, at the time of this writing. Meanwhile, it seemed, her parents (as of Apr. 2021) lived somewhere in Amston in Hebron, Connecticut.

Not to miss: her only sister Whitney, per IMBD, is an actress, reality TV personality, host, producer, and comedian known for her work in Showtimes The Real L Word. Her LinkedIn says she is a freelance event producer.

Alexis Mixter stands to a height that is above 5’8” or 1.73 meters. Apparently, the beauty is an avid tattoo enthusiast.

Alexis, who freshly voted Blue For Biden & Harris, called her Instagram page, an ‘Arts & Humanities Website’. Here, she shared tidbits from her personal life and also exhibited herself as an artist working in pyrography and mixed media arts.

LinkedIn introduces Alexis as a Photographer: Gonzoaesthetic based in Los Angeles, California.

She is a photographer/explorer at Alexis Mixter Photography. She founded the job in Jan 2012 and has been employed here for almost a decade.

Long ago, before she worked here, Alexis worked with Pottery Barn, Ralph Lauren, and Orion Trading.

Thus, the journey has presented the Fashion Institute of Technology’s BFA alum with almost a close net worth of $1 million.

One may surf through her crafts, that are on sale, online on her merch store: alexismixter.com/collections/all.

Alexis also is an active blogger routinely giving her thoughts on topics such as— Creativity in times of crisis. Some thoughts., I BOUGHT A FUKCING HOUSE!, Art is life and life is art.

So the world came to know about Alexis Mixter and Jason’s split on Apr. 29, 2021, after Alexis announced “we made the decision quite a while ago to let ourselves grow away from what our relationship had been and into what it was becoming” in an Instagram post.

On the occasion, the creator of art and crafts explained she and Jason are private people and they intend to keep it that way. Be that as it may, she just felt like sharing the news with her followers writing,

“It is odd to write about the end of a relationship, especially when the friendship that still exists is so full of life.”

The Five-Year Engagement actor and Alexis started dating in December 2013. They continued a lowkey relationship and made their red carpet debut in 2016 at a fundraiser hosted by Sean Penn.

That been said, Jason, who dated actress Michelle Williams from 2012 to 2013, never said anything about his recent parting.

Did Alexis Mixter Appear On HIMYM?

Alexis Mixter surely did not make any appearances on CBS’s ever-sensational sitcom How I Met Your Mother (abbreviated as HIMYM). Instead, as prior mentioned, it was Jason who starred in the series all through its ninth seasons.

The L.A.-born screenwriter had previously affirmed he would move on to other projects when his contract expired in 2013 but was persuaded to stay till its end.