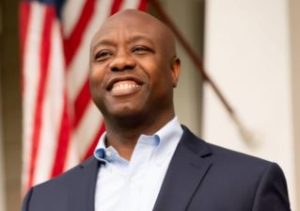 The only Black Republican senator, Tim Scott stepped into the limelight on April 28, 2021, after delivering his party’s rebuttal to President Joe Biden’s first address to Congress. The inflaming speech was presented on national TV, where Tim also reflected on his family’s history in America — including trials and their triumphs.

So, while Tim talked enough about his family’s ordeal in the past, it had audiences intrigued about persons entangled with the senator’s life. Who are the members of his family? Did he have a wife or a girlfriend? These are the questions we will be exploring as this article proceeds.

Tim Scott started serving as a senator for South Carolina back in 2013; and as of 2021, he was the only Black senator in the GOP.

Over his rebuttal following Biden’s speech, Tim shared that America should take the president’s remarks as little more than sweet-sounding promises from someone who seemed like a “good man” speaking “‘good words.” He accused Biden of leading a Democratic Party that was intent on “pulling us further and further apart”.

Apart from dissenting with the president, Tim also emphasized that “America is not a racist country” and that “race is not a political weapon to settle every issue the way one side wants.” Furthermore, Tim mentioned that he has “experienced the pain of discrimination,” and then went on to reminisce about his past.

Is He Running For President?

Tim Scott was 55 years old when he delivered his rebuttal speech in 2021.

He celebrates his birthday on September 19 and is of the Virgo zodiac.

Tim Scott was born to parents, Ben Scott Sr. and Frances Scott — who were separated while Tim was just seven. According to Tim, he saw his father at least once in the two decades, and all that he is today is solely credited to his mother.

Growing up in a poor, single-parent family in North Charleston, South Carolina, Tim didn’t want any outward signs of his family’s poverty. So, he wanted a pair of Converse high tops to hole up into. However, his mom said “No”. Tim recalled, she was toiling long hours as a nursing assistant, and couldn’t afford them. Before 2015, she was still working at St. Francis Bon Secours hospital.

If you don’t know, Tim also has a 2-year-older brother named Ben Scott.

Trivia: Tim reconciled with his father in his late 20s or his early 30s. Reportedly, Ben Scott Sr. was in the military as he left Tim and the family.

In 2021, Tim Scott flaunted a net worth of over $15 million. His reported salary was $174 thousand (plus benefits) per year then.

Talking about his career, Tim had a rough start in education. He failed four classes in his freshman year of high school. But thankfully, his mom stuck by him, and he met a mentor that showed him the wisdom of conservative principles. Slowing getting his grades back, Tim went on to join Charleston Southern University and started his own successful small insurance sales business right after he graduated.

As of 2021, Tim now owns a highly successful Allstate agency; and is the senator for South Carolina. One of his remarkable achievements during his stint includes his signature legislation creating Opportunity Zones that was passed as part of the 2017 tax reform package.

Though Tim’s contribution as a senator is second to none, he’s been called an Uncle Tom and an opportunist more than once.

South Carolina senator, Tim Scott wasn’t married and didn’t have any kids as of 2021. However, over a decade ago, Tim was dreaming about settling down with his girlfriend, and judging by how serious their relationship was going, Tim might have actually made her his wife.

Unfortunately, a 1st District seat opened up at the time. So, Tim had to choose between her or politics — as he believed that marriage and Congress couldn’t mix at that time. Thus, he broke up with his girlfriend and focused on his work as a senator.

Tim later shared that he always wanted six children, and hoped that maybe someday his future wife will want children as well. In his worlds,

“I think in the right time, I will meet Mrs. Right, and she’ll want to have a couple kids. Or she ain’t Mrs. Right. Right?”

Talking more about his dating life, Tim claimed that he was still a virgin at 30 as it was a part of his evangelical Christian faith. However, 16 years later, at the age of 46, Tim revealed that he wasn’t a virgin anymore (although he still considered abstinence as a better path.)

In 2012, Tim took a “female friend” Zee Patel on a 3-Day trip to Cloister Beach Club. Reportedly, his aunt was supposed to accompany him to the club, but when she couldn’t — he invited Zee (who was working as the general manager for a lingerie store in Charleston called Bits of Lace then.)

Later, as the news about Tim being charged with Zee’s expenses surfaced, she was then believed to be Zee’s new girlfriend. Furthermore, “FITS News” reported Tim and Zee were dating and broke up before 2013.

But Scott himself never confirmed the rumor.

After Zee, Tim was spotted with a new love interest in 2013. Though he didn’t share her name, Tim talked a little about her — “She’s great. We’ll see how it works out.”

It is unclear if the two were still dating in 2021.