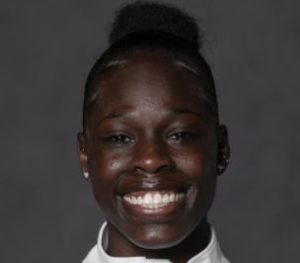 Setting the U.S. record and being the fifth-best in Olympic history, Athing Mu won gold in the women’s 800 meters at the Tokyo Olympics 2020. Her completion time of 1 minute and 55.21 seconds, also got her to become the second American woman to win the event, following Madeline Manning in 1968.

Learn more about this Olympic champion as this article proceeds.

Athing Mu was 19 years old when she won the gold medal in Tokyo Olympics 2020.

She celebrates her birthday on June 9, making her the Leo zodiac.

Victory calls for celebration, and Athing Mu celebrated with her family right after she returned home. The Mu family was spotted together gathering for a cold glass of drink, all wearing the yellow Athing-Mu-support tees.

But that wasn’t their first celebration. Athing’s family previously gather at a YMCA in Tendon, N.J. to watch her run the Olympics. And as she finished first, a few cheered, a few jumped, and a few shed tears.

Athing Mu comes from a large family. She is the second youngest of the seven siblings but was the first to be born in the US. Like Athing, her brother Malual Mu ran track at Penn State University. He is a Trenton Central High School alumnus.

Athing Mu Parents Nationality: Where Are Her Mom And Dad From?

Athing Mu’s parents, Deng Lemon and Aluel Majok are from Sudan. They immigrated to Trenton US circa 2000. Reportedly, Athing’s father worked as a seafood processor in the Pacific Northwest, and her mother worked in a warehouse.

Unfortunately, they divorced in 2003.

Trivia: After Athing’s victory, her father replaced his FB profile picture with a photo of them. Find him @deng.mu.9, and Athing’s mother @aluel.majok.31.

Athing Mu is a Sudanese name. Even without knowing its meaning, the ring gives us a noble vibe. But we were not the only ones who felt this way. We’ve stumbled upon multiple users over Twitter who were also a fan of the name.

A user wrote, “Athing Mu is an elite name.”

So, how do you pronounce it? It’s “Uh-Thing Moe”. Yes, if you have been saying it wrong, you’re not the only one. Even the Olympics announcers have butchered her name time and time again.

Being an Olympic winner certainly has its perks and among them, the major money machine would be “sponsors.” And naturally, Athing was being flooded with letters from different companies including Nike which offered her a multi-year deal.

On June 19, 2021, after announcing that she would be forgoing the remainder of her three years of NCAA eligibility in favor of going pro, Athing also said that she planned on representing Nike in numerous Summer Olympic Games.

Talking about her career, Athing has been running ever since 5. Although she chose not to compete in her high school, she joined the Trenton Track Club and met her coach Al Jennings. Fast forward to over 14 years, Athing now has a gold medal in Olympics 2020, and multiple other awards like the 2018 AAU Junior Olympic Nationals, 2018 New Balance Outdoor Nationals, and 2018 New Balance Indoor Nationals.

Previously, she also competed in the Buenos Aires 2018 Youth Olympic Games and won silver. That was her first-ever international racing experience.

When Athing wasn’t on track and field, she loved to make DIY projects like room decors and also enjoyed photography. Someday, when she is old enough, Athing wants to own a farm.

Athing Mu is an athlete who didn’t “want to leave anything up to chance.” She was so focused on getting that gold (which she did), she didn’t want any distractions in her life. So, it could be that Athing didn’t entertain the idea of having a boyfriend before she won the Olympics in 2021.

But not much has changed now, Athing shared that she will be going pro, and that means more dedication and challenges. Guess, it might be a while before we hear about her boyfriend.