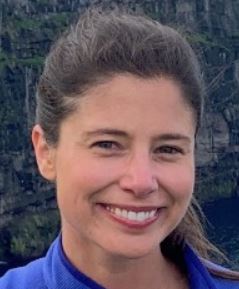 In the midst of all the hassle of the presidential transition, the new president-elect Joe Biden recruited Jake Sullivan as his national security advisor. And here we are presenting to you an in-depth article about Jake’s wife Maggie Goodlander.

The article below to know who the wife of Jake Sullivan is, what does she do, and how important is she going to be in the wake of Jake’s new responsibility.

Having her birthday on the 4th of November, her zodiac sign was Scorpio.

There was not much to say about Maggie’s early life or her family before marriage. She was born and raised in her hometown of Nashua, New Hampshire.

Her family belonged to a white Caucasian community and was most probably American for some generations and not immigrants. Although nothing could be said with precision.

Maggie Goodlander stood at a slightly taller height than the usual woman. Her height was 5 ft 7 inches. And she had an average weight of 57 kgs.

Besides her height and weight, what were her distinct features? Well, she had a toothy smile, dark hair, and beautiful sky blue eyes.

Maggie’s presence across various social media platforms was not that big. She was present on Instagram, Twitter, and Facebook but her presence was very minimal. None of her social media looked like the one of a person who had a great influence on American politics.

Maggie had kept her Instagram private and had only 638 followers, as of Nov 2020. Similarly, on Twitter, she only had 513 followers.

And, she did not have a Facebook page but the usual profile. Although her Facebook profile was not private, she had kept the information about her friends hidden.

Unlike her other social media profile, her Linked In profile was very full. More on that in the next section.

Like her husband, Maggie Goodlander was also an expert in law and foreign policy. Like her husband, Jake Sullivan, she attended Yale University for her college education. But her husband was almost a decade senior to her.

Unlike her husband, who had graduated with a degree in Political Science in 1998, Maggie graduated in 2009, with a BA degree in History.

Again, similar to her husband’s trajectory, for her masters’ education, she attended Yale Law School and graduated with a Juris Doctor degree. She finished the Law School in 2016.

After graduating from Law School, she worked as Law Clerk to Chief Judge Merrick Garland and then to Justice Stephen Breyer. Since August 2019, she had been teaching Constitutional Law and Administrative Law at the University of New Hampshire Franklin Pierce School of Law.

As of November 2020, Maggie’s net worth, aside from her husband’s, was estimated to be around $2 million.

Maggie Goodlander was married to Jake Sullivan. Jake Sullivan was the visiting professor at the Yale Law School and had worked as a foreign policy advisor to Hillary Clinton as well as Joe Biden. And most recently, he was appointed the National Security Advisor by the new president-elect Joe Biden.

Maggie and Jake met each other sometime between 2009 and 2013 when Maggie was working for Senator Joseph Lieberman. Both Maggie and Jake were in Munich for a security conference.

Thus started dating went on for a few years, and throughout most of Maggie’s studies at the Law School. It culminated with a wedding in 2015.

Maggie and Jake married in a big white wedding that took place at Battell Chapel on the Yale Campus. 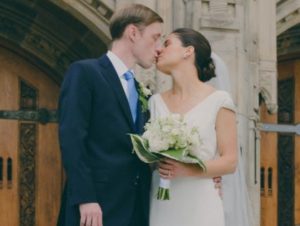 Maggie Goodlander and her husband Jake Sullivan during their wedding circa 2015 (PC: elisemeader.com)

The wedding ceremony was attended by the big names in American politics like the U.N. Ambassador Samantha Power, former president Bill, and the Secretary of State Hillary Clinton. Hillary Clinton, in fact, took part in the ceremony itself and read from the Letter of St. Paul to the Romans.

As of 2020, there was no news of any children being born in the Sullivan-Goodlander household. Jake was busy with his political success and Maggie must be content training young minds in law.

The couple was currently living in New Hampshire.