The mom of two took to her Instagram to share the news about the little one’s arrival. And everyone including the 663K fam on her Instagram wanted to know all about her baby’s daddy. So, he is none other than her husband Mackenzie Hunkin.

Here is this Mackenzie Hunkin wiki covering all about him including his relationship with The Clothes Show and Fashion Police host.

Mackenzie Hunkin was reportedly born in the year 1986. Based on this, and his birthday i.e. April 25th, he should have reached the age of 35 in 2021. Also, this makes him a supposedly loving-natured and determined Taurus.

Mackenzie Hunkin Family, Is He Australian?

Mackenzie comes from his hometown of Eton which is a town in Berkshire, England.

Meanwhile, he is currently a Los Angeles, California inhabitant. And there was not anything that proved he is an Australian. However, in his LinkedIn, he mentioned having both American and British passports.

Anyway, Mackenzie’s family, of six, appears to be a closely knitted bunch. He has three brothers and parents with whom he and his brothers share a very close resemblance.

Mackenzie Hunkin stands to a height that is above 6’2” or 1.88 meters.

Mackenzie’s social media accounts are just the place to explore his married life. He regularly shares the tidbits from his married life and also updates his followers if anything happens.

So far, he entertained 22.3k followers on Instagram on whose bio he also described himself as an actor besides director and producer. This way, Mackenzie who once worked at MTV also was active on Facebook.

Mackenzie, a Television Director/ Producer in West Hollywood, California, reportedly collected around $1 million net worth (before May 2021).

He worked several jobs of freelance TV production at ITV, Talkback Thames, Channel 4, Gogglebox entertainment for less than a year from 2011 to 2012. And only then he thought of staying self-employed while being a TV producer/director (likely for the rest of his active years).

So, in late May 2021, a newborn in the form of a baby girl arrived in Mackenzie and Louise’s household. The new mom and dad shared the news of the occasion on May 29, 2021.

Over the moon, Louise and Mackenzie who also share a 3-year-old daughter Honor Florence named their second daughter Inès. 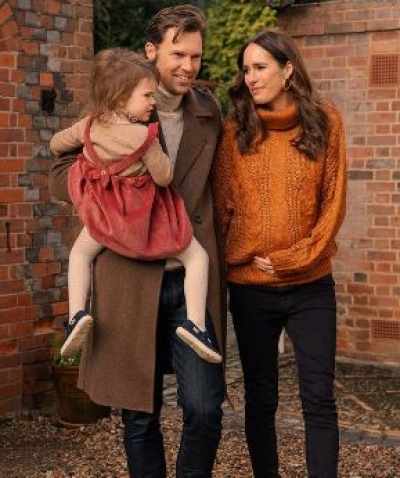 Mackenzie is super proud of the way Louise handled both pregnancies. He took to his Instagram to write, “I want our girls to have your lovely qualities, amazing determination & wonderful strength.”

He also revealed that while his pregnant wife was in the hospital bed, bringing Inès into the world, he was by her side with his “lucky birth jumper” on.

Louise Roe announced she was expecting her second child with Mackenzie back in January and has since been reflecting on her pregnancy.

Even when she was pregnant with Honor, Louise had detailed the journey on her website, sharing that while she was thrilled to be pregnant, the experience did not come without some perils in the beginning.

Louise, who has written bites for Daily Mail, MSN, Elle UK, and Vogue UK, had explained the early days of her pregnancy as the hardest. That, she was “horribly nauseous and more fatigued” than she had ever been in life. And of all the most challenging part was having to hide it from her friends, family, and coworkers.

Mackenzie met Louise on the set of Louise’s makeover show Plain Jane, where he was working as a director. This happened sometime in 2014.

So, in Jan. 2016, they got engaged during a romantic week in Aspen and early in Oct. 2016, they got married. The wedding took place at Eton College Chapel inside a 15th-century building, which is a place the groom often went to as a child.