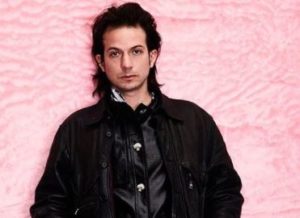 Luis Felber might be a musician but he was most recognized as the boyfriend to the actress and writer, Lena Dunham. For those of you wondering where have you seen this guy before, well, he appeared on Lena’s April 2021 IG post; where his avatar was seen frolicking around a stripper pole in green panties.

Curious to learn more about him? Stay with this Luis Felber wiki to delve into his personal life.

Luis Felber was reportedly born after 1988. So, his age couldn’t be over 32 as of 2021. Also, that makes him younger than his girlfriend Lena Dunham who was 35 then.

The musician is wished for his birthday on March 24, making him of the Aries zodiac.

Luis Felber is Peruvian English, and he is proud of it. Spending most of his early days in Peru, Luis shared that he “kind of pressured to hide” his heritage after moving to the UK. “I don’t know if that’s something to do with me or society, but I didn’t really embrace it until recently,” he confessed.

He then went on to boast about Peruvian foods and cultures, and clearly, he was a proud Peruvian. Also, he talked very fondly about his family.

What’s more, Luis’s stage/middle name “Attawalpa”, even comes from the legendary Incan King “Atahualpa.” He shared that it was his mother who gave him that name and also taught him all about the Inca civilization.

But Luis wasn’t the only one who received the name of an emperor. His brother was given the name “Tupaq” (the other the last two rulers of the Incan empire) by their mother.

Also, find him over Youtube with his eponymous channel that had 412 subscribers.

Most of his posts then were about his music promotion.

Luis Felber is a musician by profession, and by musician, we mean, a singer and guitarist. But the guitar isn’t all he is limited to, his official site mentioned that he is a “multi-instrumentalist.” Furthermore, they mentioned his “meticulous production” to be filled with “melodies and honest lyrics evoke the future as much as the past.”

As of 2021, Luis co-owned the renowned label, Young Turks, which produced his album Attawalpa. He shared that the particular album was a deeply personal project that left “the audience at times feeling almost voyeuristic.”

Over Spotify, Luis then had over 8 singles and eps, and two albums with 36.8K monthly listeners. Some of his popular were No Fools, Yellow finger, and Done Hanging On.

Talking about his career, Luis shared that he was always “a sponge”. He learned to play guitar by watching MTV, and slowly got better over time.

Furthermore, he also claimed music to be his “therapy”. Back when Luis was going through depression, it was music that saved him.

So, does his Peruvian ancestry influence his music?

“In relation to my music and my life, I see that there is a formality and a rebellion that comes from Europe, and a freedom and something supernatural that comes from my Peruvian ancestry.”

Find his merch at “attawalpa.bandcamp.com/merch/” which then featured a “Screen-printed No Fools, Kingsley Ifill/Tom Beard design T-shirt” at £15.

Luis Felber And Lena Dunham: Dating, How Did They Meet?

Though Luis Felber was confirmed to be Lena Dunham’s boyfriend after June 2021, the two apparently have dated since the start of the year.

It was back in May 2021, Lena first hinted to her fans about Luis. She posted a music video from his song “Yellow Fingers,” which featured Luis’s animated icon in green underwear.

A month later, she then took it to her Twitter to promote her boyfriend’s chat with Kate Nash for her “Lovely Radio Programme.” She wrote,

“Luis is sharing thoughts on his emotions, his mental health, addiction issues, and his passion and long-lasting enthusiasm for music.”

Also, at the time she talked about him with the New York Times but didn’t reveal his name.

The last we saw her, she was praising Luis over a Tweet.

“When I feel sick, my boyfriend makes delicious pasta & rewatches as much BoJack as I want, walks the dog & makes up songs about her face.”

“In January, all I Tweeted about was how men are basically refried beans in human form. What I’m saying is, don’t quit before the miracle, kids”