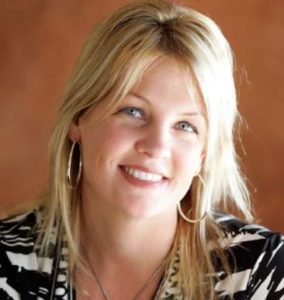 Married to Guy Fieri for over two decades, Lori Fieri is the first lady of Flavortown. Though Lori had no credentials to name her a celebrity, she came to the limelight as the wife of Guy Fieri.

Lori first met Guy Fieri as a completely different person. She recalled, unlike Guy’s prominent spiky bleached hair, he had dark hair and no goatee either. Furthermore, it was surprising when she mentioned Guy wore a suit to work every day.

“I tease him every once in a while. And I do want a little change sometimes. But that’s like me changing my hair to black. I mean, I’m not going to do that for him, so… “

It seemed that the Fieri family was happy and we couldn’t hope better life for Lori and her kids. Learn more about, Lori Fieri’s birthday, net worth, and nationality on this short bio.

Corresponding to her birthday, Lori is of the Gemini zodiac.

You may like – Angelo Sosa Married, Wife, Son, Net Worth, Height, Top Chef

Reportedly, she comes from an underprivileged family, and her parents did menial works for a living. Lori’s father was a toolmaker while her mother managed the household.

As for her nationality, Lori is American.

With no details on her education, Lori kept her life choices under the wraps. As for her job, she is a homemaker who spent most of her time encouraging her husband and kids.

She has made several appearances on her husband’s TV shows. Also, she was offered special seats in major events like NASCAR and Super Bowl.

Entitled to her husband Guy Fieri’s half asset, Lori Fieri’s net worth can be estimated to be around $12.5 million.

Lori first met Guy Fieri In 1992. Back then, Guy was running a restaurant in Long Beach, Calif, and Lori had come along with her friend (who was recently fired from the restaurant) to dine there.

The lovebirds first encounter wasn’t as you’d expect it to be. As Guy saw his ex-staff, he went over and said ‘Hey, listen, wait a few weeks before you come in’. And from the back, it was Lori who came to her friend’s defense, ‘You can’t make us leave”. 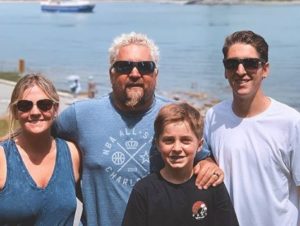 Lori Fieri with her husband Guy Fieri alongside their kids (Source: Guy’s Instagram)

After a while, Lori and her friend agreed to keep a low profile and the three of them started conversating. Lori shared that she was on a road trip with the plan of moving from Rhode Island to San Diego. But, she never made it to San Diego as Lori & Guy started dating.

Admittedly, Lori was impressed by Guy’s cooking skills. She loved food and after tasting Guy’s first dish, she realized that he was the husband she wanted. Also, Guy expressed his first impression of her, “I knew as soon as I saw her. I just knew.”

Lori and Guy were married at a young age. Dating for more than 3 years, the duo tied the knot in 1995.

After the wedding, both Guy and Lori changed their surname names to Fieri. Though Guy’s hereditary surname was Ferry, he changed it to Fieri to honor his grandfather, Giuseppe Fieri.