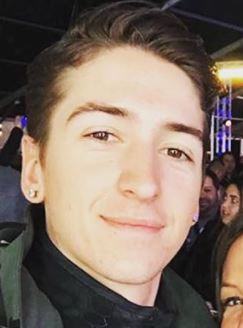 Hunter Fieri is the son of Food Network star, Guy Fieri. He is the self-proclaimed “Prince of Flavortown” who aspires to follow in his dad’s footsteps.

In October 2020, Hunter was all set to join his dad for the new season of “Guy’s Grocery Games”, which was scheduled to take place in Santa Rosa, Calif.

In an interview with the NY Post, he shared,

“I work side by side with my dad. We’re best friends, we do everything together at this point.”

Guess we’ll be seeing more of the father-son duo in days to come.

Here is everything you need to know about Guy Fieri ‘s son, Hunter over this wiki-style article.

Corresponding to his birthday, Hunter is of Leo zodiac.

With hometown the US, Hunter was born to father, Guy Fieri, and mother, Lori Fieri. Also, he has a 9 years younger brother named Ryder Fieri who appeared on Guy’s Family Cruise and Guy’s Big Bite.

Hunter and Guy are cut from the same cloth. He confessed that he always wanted to be with his dad on TV since he was a child. Whenever he could, Hunter would tag along with Guy America’s hole-in-the-wall joints.

But growing up, Hunter had a different passion rather than cooking. The chef-now then wanted to be a Supercross racer. Also, he was the sporty type who would spend his free time playing basketball and soccer.

Hunter talks about his career choice as,

“I didn’t really like anything else. I liked to be outside, and I liked construction and whatnot, but cooking is what it is. It’s what I do. It’s what we all do.”

Did u know: Hunter respected his dad so much that he got a tattooed replica of the “star” that Guy received on the Hollywood Walk of Fame.

What Is Hunter Fieri Net Worth?

Hunter Fieri’s net worth was estimated to be around $400 thousand as of 2020. This may not be anywhere closer to that of his hero, Guy’s net worth of stunning $25 million. But it was a good start.

And earning him the numbers was his job as a cook and reality shows. Yes, Hunter Fieri is a chef who worked at Johnny Garlic’s and Tex Wasabi’s; restaurants that Guy started but has since sold his shares in.

As of 2020, Hunter was focused on expanding the  “Flavortown horizon” and help Guy with his shows.

He made is first appeared on his father’s series Guys Big Bite. Since then he frequently appeared on Guy’s franchise like “Diners, Drive-Ins and Dives”, “All-Star Best Thing I Ever Ate”, “Guy’s Family Road Trip” and more.

However, Hunter isn’t content with being “Guy Fieri 2.0.” He shared that he just wanted to follow the same path and in the future wanted to open his own restaurants.

But he would always follow the work ethic that his dad taught him i.e

“Keep working, and keep your head up high. And learn everything you can.”

And the most important lesson Hunter learned from his dad was,

“Don’t be Guy Fieri’s son, be Hunter Fieri. Show them what you’ve got.”

Furthermore, the father-son described each other with a single/same word, “Authentic”.

Talking about his education, Hunter graduated from high school in 2015. Then he attended Guy’s alma mater, The University of Nevada, Las Vegas (UNLV), and in 2018, he was in his third year. He shared that he went to UNLV because it was one of the best places for hospitality.

Furthermore, he interned under Caesar’s group, where Bobby Flay, Giada De Laurentiis, and Gordon Ramsay had restaurants. Also, he was supposed to train under Gordon in London for the fall semester but UNLV didn’t provide the credits while abroad.

Trivia: Hunter had a mobile pizza trailer called Kulinary Gangstas as a side hustle in high school which lasted for two years.

No, Hunter Fieri wasn’t married as of 2020. Also, he didn’t seem to have any wife prospects then.

However, Hunter could be secretly dating for all we know. Some claimed that Hunter was gay while others believed that he had a girlfriend. But, none of the reports we received were factual.

Also, there was a long list of girls head over heels for the guy. Over Twitter, a fan wrote,

“@HunterFieri if you are single, I volunteer as tribute to be your girlfriend during this new decade”.

“Where do I apply to be @HunterFieri ‘s girlfriend, Id make a bomb addition to the fam”

And it’s no surprise, given Hunter’s charm and skill, that girls were crazy over him. After all, what wife wouldn’t want a husband that can cook and be the best one at it.