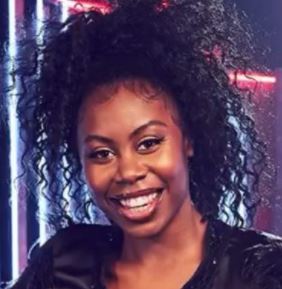 Lois Moodie is a sensational singing talent, who rose to fame as a participant in The Voice UK.

Read the article below about the young talent and many different interesting wikis about her.

As of November 2020, Lois was 22 years of age. Also, she celebrated her birthday every year on 29 January.

Having her birthday on 29 January, her zodiac sign was Aquarius.

Not much was known about her family. The names of her parents remain mysterious, and so does their origins. From whatever was known about Lois Moddie, she was one of the four children in the family.

Plus, she spent a great part of her early life singing with her family. That was where her musical disposition came from. She was singing at the early age of 4.

Also, London is her hometown and she actually came from South East London.

Lois Moddie was a woman of average height, standing at 5 ft 6 inches. Also, she weighed 58 kgs.

If we were to mention her distinct features, we might mention her afro hair, which she binds sometimes with a bandanna. Moreover, she had a wide toothy grin and very pronounced cheeks.

Similarly, she had joined Twitter in February 2020, after appearing on The Voice UK. And in the next 8/9 months, she had just earned 98 followers.

Lois did not seem to be present on Facebook.

It was not known where Lois got her high school education, probably in a local South London high school, whose name we do not know. However, for her undergraduate education, she attended the London College of Creative Media (LCCM). Currently, she was pursuing a Bachelor of Music (BMus) degree.

Before appearing on The Voice UK, Lois worked as a Gospel singer, i.e. she sang in churches.

Her The Voice Journey

Lois’s popularity came with her appearance in The Voice UK. The ninth (current) season of The Voice UK premiered on 4 January 2020. The blind rounds, the battle rounds, and the knockouts aired. Then the COVID pandemic hit.

The series was postponed and the semifinals started on 7 November 2020. By the time, this article was written (8 November 2020), the show was still airing. The final was scheduled to air on 14 November 2020.

Now, during the blind auditions, Lois sang Beyonce’s I was Here. So powerful was her performance that three judges (Olly Murs, Sir Tom Jones and will.i.am) turned and fought for her. She went to Sir Tom Jone’s team.

During the battle rounds, she sang John Legend’s Ordinary People against fellow contestant Sean Connolly. In that round, she emerged a victor. Then in the knockouts, she performed an energetic rendition of Battlefield by Jordan Sparks. She advanced to another round.

Although her hopes of winning The Voice UK were over, she had found a lot of exposure and coaching from the show. And that would surely help her in her upcoming music career.

When it came to her dating life, there was absolutely no information. Neither her Instagram nor Twitter had any hints of Lois Moddie having a boyfriend. If she had a boyfriend (or a girlfriend for that matter), she had hidden him/her well.