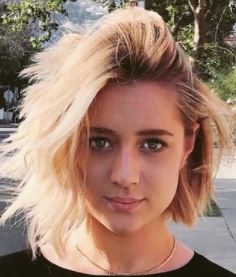 The Karate Kid fans would probably know Tanner Buchanan from Cobra Kai. Well, in this article we bring to you Tanner’s girlfriend, Lizze Broadway.

Lizze is an actor and model and rose from a small town in Ohio. Read along to know more about her journey to the mainstream. And also find some interesting wikis.

With her birthday on the 16th of February, Lizze’s zodiac sign was born an Aquarius.

There were only a few things known about her parents. According to some sources, Lizze’s father was a high school director. Also, her mother moved to LA with her to help her pursue a career in acting. The names of her parents were not known.

She had one known sibling in the family, a sister whose name was also unknown. Her sister also moved to LA with Lizze and her mother. Whether she was also pursuing acting or some other career was unclear.

Lizze Broadway stood at an average height for an adult American woman. That meant she had a height of 5 ft 6 inches. Also, she weighed about 59 kgs. Talking about her body measurement, Lizze had a figure of 32-24-32 inches.

Lizze was a very beautiful woman with exotic light blue eyes, a beautifully flowing blonde hair with darker towards the root. And she had an infectious smile.

Lizze had quite a social media reach, at least on Instagram she did. On Instagram, she had 11 posts and 62.5k followers [Dec 2020]. But scouring through her Instagram, one could suspect that she might have deleted her previous posts. Her earlier post was from November 2019 only.

There was also an Instagram fan page of hers with 33 posts and 208 followers. On Twitter, she had only 94 followers. She also had a Facebook profile but there wasn’t information in there.

After moving to LA to pursue an acting career, Lizze started as a model. She appeared in a lot of commercials and voice-overs. She even went on to win an International Model and Talent Competition.

In 2010, she made her acting debut with the TNT crime drama series Southland. After that, Lizze went on to make several minor appearances in movies and TV shows.

She appeared in TV shows like Shameless, Bones, Conan, Trophy Wife, Chicago P.D., NCIS, Here and Now, Henry Danger, Splitting Up Together, The Rookie, Slay; in some TV movies like Bad Mom, 16 and Missing, The Lost Boys; and movies like A Killer Walks Among Us, Instakiller, etc.

Lizze had also appeared on American Pie Presents: Girls’ Rules, a comedy movie in which Lizze played one of the main characters of Stephanie Stifler. She also had a movie called The Inhabitant on the line. The movie was still on the filming stage.

Furthermore, Lizze also had a few awards in her bag. She was nominated for guest-starring in TV series (Young Artist Award) 2014 for Bones.

Now, coming to Lizze’s dating life. There was one boyfriend of hers who was known to the public, Tanner Buchanan. Tanner is a fellow actor, rather a much famous actor than Lizze.

Tanner is most famous for his role as Robby Keene in Cobra Kai, a TV series based on The Karate Kid film franchise. There were some rumors that Tanner was dating his co-star from Cobra Kai, Mary Mouser.

Mary Mouser’s character was Tanner’s character love in the show. But in real life, she was dating Brett Pierce and not Tanner. And Tanner, as we said, started dating our own Lizze Broadway.

Tanner came out as Lizze’s boyfriend when, in 2017, he posted a picture on Instagram, a very romantic picture of candles and roses with the caption “What you do when the person you love comes to visit.” And Lizze was tagged in the post.

There were reports that Tanner and Lizze had broken up. Apparently, Tanner had deleted all the photos of Lizze from his Instagram. And that was as good a reason as any to conclude that they had broken up.

Interestingly, Tanner had not deleted that romantic photo of candles and roses. And Lizze was still tagged in the post. We might leave the rest for the readers to guess.

There were also reports of any other boyfriends of Lizze.