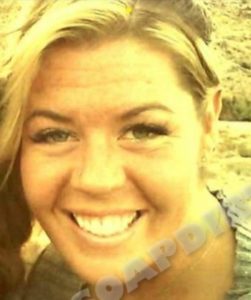 People have always been fascinated by TLC‘s Sister Wives for they get to see what happens in a polygamist family, which practices fundamentalist Mormonism.

Kody Brown married his first wife Meri Brown all the way back on April 21, 1990, and eventually married three more wives, with the last one being on May 22, 2010.

Fans always wondered if the Brown family has any space left for Kody’s possible 5th wife. As the rumors swirl around, it certainly looks like Sister Wives viewers should not wait long to see Kody’s rumored fifth wife, Leah Marie Brown.

In 2019, something strange thing happened in the Sister Wives Universe which left the entirety of the viewers clueless. A woman named Leah Marie Brown was added to the Brown family’s Wikipedia page out of nowhere.

Before anyone could dig any details, the addition to the Wikipedia page disappeared. Since several netizens were aware of what had happened, all of them stormed out with their take on the matter.

One Reddit user pointed out the fact that Wikipedia can be edited by anyone. He wrote, “I’m not buying it. I can go on there and add a 6th wife if you want.”

While many viewers did not take it seriously at that time, many of them began to doubt themselves after seeing the deteriorating relationship between Kody and his first wife, Meri, in the fourteenth edition of the show.

Amid all that, a Facebook post surfaced on the internet which further added fuel to the fire. As per the report, her name was Leigh Marie Brown and she would appear in the fifteenth season of the show, which is expected to premiere in April 2020.

One line of speculation seemed to support the ongoing rumors. As per the reports, the blueprints of the Brown family’s new proposed house included five sections. Since Kody never had a private home for himself and rotated between his wives, the fifth section could very well be for his fifth wife.

Another source claimed that Kody always had an extra house close to his fourth wife Robyn’s and since the house would be empty after Robyn relocates to her new home, Kody and his rumored wife Leah might live in those two homes.

That being said, no one knows what is truth and what is a lie. Everything will slowly uncover once the fifteenth edition of the show premieres.

Every viewer of the show is curious to know the identity of Leah Marie Brown. But, extracting any details about her is nearly impossible at the moment.

There’s an author who goes by the name of Leah Marie Brown, but she has been publishing books under that name long before the alleged wedding date. And unless her maiden name is Brown, which is almost too much to be real, she is not the same Leah.

According to the Facebook post, where it was clearly written Leigh Marie Brown will be seen as Kody’s fifth wife in the future, not Leah Marie Brown. But, as the details began to surface, the picture used in the post itself is misleading. 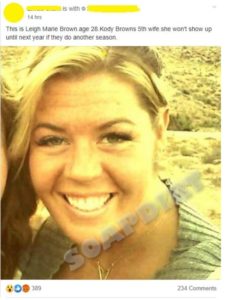 The person in the picture was revealed to be Mindy Jessop, Robyn’s niece. Before the rumor of Mindy being Kody’s fifth wife even began to form, she shot it down.

Thus, it is too early to find any details about Leah, including her job, net worth, if she exists at all.

Every single viewer of Sister Wives is keen to know who Leah Marie Brown is. But, with the given information, it’s impossible to dig any details of her age, birthday, or zodiac.

The same is the case with Kody’s rumored wife’s Wikipedia. Even if Leah Marie Brown exists, there is no information about her family, hometown, or education.

Not a single physical feature — be it height or weight — of Leah Marie Brown is available on the Internet.