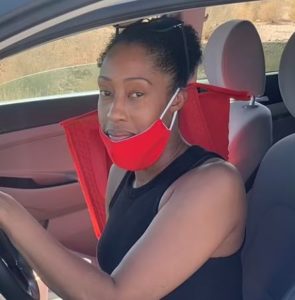 LaTanya Young, daughter of Dr. Dre was again in the spotlight in 2021 after claiming she was homeless. People were surprised to know that the firstborn of a millionaire father was living in the car as she didn’t have money to pay the rent of her apartment.

Based on the interview with Dailymail.com, LaTanya Young revealed that she was the one living in the car. LaTanya further shared she couldn’t afford to secure an apartment in California. Moreover, she pleaded with her father for help, repeatedly, but she didn’t receive a single dime in 18 months. So, based on all of that, LaTanay Young is homeless and living out of a car.

LaTanya shared that she asked her father for help but her father’s lawyer told her that he had no interest in it. Dre was disappointed that his firstborn talked about him with the media in the past. He had helped her with the rent and allowance in the past but that ended in January 2020.

But, people also searched for LaTanya Young’s history with drug abuse and if it was the reason that she ran out of money. But, as a mother of four kids who worked three jobs to support the family, she never made headlines with any story of indulgence with drugs.

LaTanya Young was a 38-year-old woman as of August 2021. She celebrates her birthday every year on 19 January. Based on that, she owned Capricorn as his zodiac sign.

LaTanya Danielle Young was born to her father Andra Romell Young AKA Dr. Dre and her mother Lisa Michell Johnson.

Dr. Dre is a Hip Hop industry mogul and an entrepreneur who ran headphone company Beats By Dre and is worth nearly $800 million in net worth.

Dr. Dre became legally single after his marriage with his wife Nicole Young fell apart. His 24 years of marriage came to an end after she filed for divorce in June 2020 where the reason behind the divorce was stated as “irreconcilable differences.”He was ordered to pay nearly $300 thousand a month in spousal support.

Talking about LaTanya Danielle Young’s mother Lisa Johnson, she and Dr. Dre dated each other as a teenager before he became a legendary rapper and record producer. Lisa met Dre when she was only 14.

LaTanya’s mother, Lisa was raised in South Central Los Angeles before she moved to live on the city’s west side. Based on Ben Westhoff’s Book, Original Gangstas, her father was estranged from her life and her brother was the victim of gang-related violence.

However, LaTanya’s parents split when she was 5 years old.

Dr. Dre and Lisa Johnson had three children together; all girls. Besides LaTanya, others are LaToya born in 1984, and Ashley Young born in November of 1985. Lisa was in 10th grade when she was pregnant with LaTanya and her mother threw her out of the house.

LaTanya made claims that she hasn’t seen her father for 18 years.

LaTanya Young, who has publicly appeared only a few times, seems like she stands tall at not more than 5 feet 10 inches (1.77 meters). A few of her features resembled Dr. Dre, that includes her oval face.

Struggling with debt and surviving with the paycheck from her father, LaTanya Young must have a net worth under $50 thousand.

LaTanya Young, as a single mother, did several odd jobs to support her kids. She stated to Dailymail.com, that she worked as a delivery driver for DoorDash and Uber Eats and worked as an assembler at a warehouse.

Dr. Dre’s daughter also opened up about making $15 an hour as an assembler at the warehouse. She told that she had been in a debt for a while and was struggling to keep her head above the water.

But, what she feared the most was, LaTanya would lose her rental car as she has not been able to make payments. She rode an SUV that cost her $2,300 for three weeks and she was only able to make the payment of one week.

Before moving to California around June/July of 2021, LaTanya lived in Nevada with her kids. She uttered that there weren’t enough jobs in Nevada and Cali paid better wages to their workers.

LaTanya Young is a mother to her four kids; Tatiyana, 16, Rhiana, 13, D’Andre, 8, who is named after his grandfather, and Jason III, who was three years old as of August 2021. None of her kids got the opportunity to meet their legendary Hip Hop artist grandfather even once in their life.

In LaTanya’s own words, her kids are old enough to know who he was and they were in shock that he didn’t want anything to do with them.

Ever since LaTanya and her kids became homeless, she managed to stay in her friend’s house. She has friends and family who would let her and her family come back and forth but she lived mostly in her SUV.

There is no information on the whereabouts of LaTanya Young’s baby father.