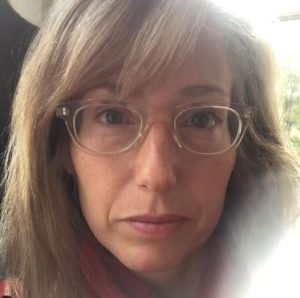 Wood Work star Clint Harp earned recognition for his love of carpentry. And with the new show on the way, fans turned their head towards his relationship with his equally famous long-time wife Kelly Harp.

Kelly Harp turned 42 years old in January of 2021. She celebrated her birthday on 23 January. Furthermore, she secured Aquarius as her zodiac sign.

Kelly Harp (maiden name Garrett) was born to her father Bob Garrett and Debbie Garrett in her hometown of Texas. Besides the name of her parents, no further information surfaced on her parents.

However, her father was born to her paternal grandfather Homer C Garrett and his wife Marjorie June Golden. They married in 1947 and raised two children including Bob Garrett and his sister Barbara Garrett.

Moreover, her grandfather excelled in football and baseball. He also enlisted in the U.S. Army and served during World II.

Sadly, Kelly Harp’s grandfather passed away on 28 September 2019. Furthermore, his siblings and other family members include Homer Garrett, John Garrett, and Johnna Garrett.

In the same way, Kelly has blonde hair and a sweet smile that accentuates her beauty even further.

Kelly Harp started her career working in RH Donnelley in July 2003. She worked there as a Directional Media Consultant and worked there for three a little above 3 years.

Later in August of 2009, she joined Beijo Handbags. In Beijo Handbags, she served as Bejio Senior Fashion Consultant. She worked in the company for a little above 3 and a half years. She sold designer handbags and accessories to women.

From January of 2013, Kelly Harp started working as Independent Cabi Stylist & Team Leader. She was privately hired by clients to advise on dressing options.

Later, Kelly and her husband merged their business to form Harp Design Co in 2011. Before that, her husband quit his six-figure job and started working in furniture.

Moreover, they often collaborate on pieces, and Clint values her design advice. In Clint’s own words: “We’re fortunate enough to work together, and we often like the same sort of design.”

Kelly also debuted her reality star career in TV shows in HGTV show Fixer Upper (2014). In 2016, she was featured in Against the Grain. Moreover, in 2017, she also co-hosted in episodes of Wood Work. She hosted seven episodes in total of the show.

Kelly Harp reportedly sits on a total net worth of $400 thousand.

Kelly Harp and Clint Harp were both attending Baylor’s University in the late ’90s when they first met each other. One fateful day, Clint found himself at a friend’s apartment when Kelly walked down the stairs.

At their very first meeting, Clint found her very hot in just a brief moment of exchange. But, he later found out that they were previously acquainted. Shortly after, they started dating each other. 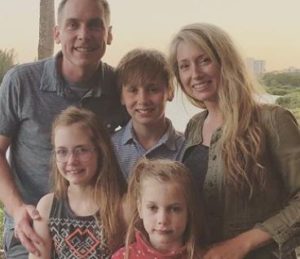 Kelly Harp with her husband and adorable kids (Pic: Instagram)

While Clint expressed his love for his future wife, Kelly didn’t reciprocate the same feeling. In Clint’s own words:

Kelly and Clint tied the knots in 2001. They shared almost no information on the details of their wedding. The couple celebrated their 19 years together in July of 2020.

As for Clint, he made a TV debut with Fixer Upper in 2014 alongside Chip Gaines and Gaines. In April of 2021, Clint was announced as the show of the new TV show Restoration Road.