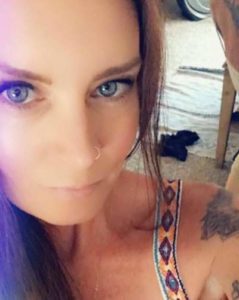 Now sober and engaged to his girlfriend, literary manager Molly Hurwitz, Matthew Perry’s life has not always been sunshine.

We all know of his struggle with addiction for decades to drugs like Vicodin and more. He did a third stint in rehab in May 2011 and the first two times were in 1997 and in 2001.

Sometime before, his ex Kayti Edwards just gave a bombshell interview about her former relationship with him.

Here’s everything you need to know: Who Kayti Edwards is and what she about the Friends star.

Sometime in 2020, she turned 37 years of age. But until the time of this writing, we could not identify her birthday or zodiac sign.

Kayti Edwards was born to a famous family in their hometown of Malibu, California, in the United States.

Her father is Peter R. Chittell and her mother is Jennifer Edwards, an American actress best known for playing the title role in the NBC made-for-television movie Heidi.

Kayti’s maternal grandfather Blake Edwards was a filmmaker in America. Also, her step-grandmother and her mother’s step-mom Julie Andrews is a supremely talented English actress, singer, and author.

Not to mention, for siblings, Kayti has a younger sister with the name Hannah. Also, on Facebook, she mentioned Christian Plummer as her brother.

Regarding her upbringing, An article (2001) describes Kayti as being raised by her grandparents. It said she also had difficult adolescence (regularly ran away from home and stole cars).

Kayti Edwards with long dark brown hair and standing to a height of 5′ 5″ (1.65 meters), wears a nose ring on the right side. Her eyes of a beautiful blue shade.

Meanwhile, her Facebook gallery is filled with Snapchat selfies of her, with her friends and family.

Kayti Edwards, according to her Facebook bio, continued working at Palm Desert. She became part of it in December 2019.

Also, she is reported to have some kind of modeling career. In 2001, she posed nude, in an issue of Hustler magazine.

Kayti Edwards stayed friends with the actor after they briefly dated in the 2000s.

The former model told The Sun how she used to “pick up the stash” for Matthew who hit a particularly rough patch in 2011.

Kayti recalled, she was like five months pregnant going down and getting stuff for him (at the time). To her defense, she claimed she was merely trying to help the actor and meet dealers to stop him from “wandering around the streets” himself and getting caught by police or paparazzi.

But it was also for money Kayti did what she did.

Outside of these, there not much known about Kayti’s relationship status. She was previously married but seems to have called it quits.

So, for now, no one in the media or public tell if she is engaged or dating anyone.

All we know is, she is a mother to her beautiful kids, yet unintroduced to the world.

Sometime in November 2020, Kayti claimed to the Daily Mail that she and actor Dax Shepard “made love” two years after Dax started dating now-wife Kristen Bell.

But, Dax gallantly denied the shut down the allegation commenting,

“Kayti has sold stories to tabloids about Matthew Perry, Jack Osbourne, Kid Rock, and now me”

He continued, playfully, to add,

“I look forward to her next one. Fingers crossed it’s about my #1, Brad Pitt.”

While Kayti told the DailyMail, she doesn’t want “anything to do with Dax. She stressed she only spoke up to tell “the true story (rather) than have the picture (DailyMail had shared an image her of Dax and getting hot and heavy during a make-out session in a photo booth) floating around and people running with it.”

In the meantime, Dax and his Good Place actress wife have been married since 2013 after six years of dating. They have two daughters: Lincoln and Delta, below six.