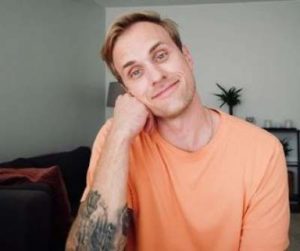 Adam took the big news to his Instagram writing, “I’m excited to marry JP because he’s just the best. He’s kind, he’s funny, and he’s just as beautiful on the inside as he is on the out (which is a lot). He’s my cheerleader and I’m his. I just love him a lot”.

Following this, naturally, people wanted to know more about Jussi-Pekka.

Jussi-Pekka Kajaala turned 33 years of age on June 8, 2020. Based on this, his zodiac sign is Gemini.

Read Next: Dazharia Quint Noyes [bxbygirldee] Wiki: Cause Of Death

Jussi-Pekka Kajaala, with Finnish nationality, continued living in Finland. There he was building a summer house for him and Adam to live in.

At the time, his family background remained a mystery. And so did his educational history.

At the time of this writing, Jussi-Pekka had 25.4K followers on his Instagram account. The last time he posted something on Facebook was in October 2017 which indicates he is not that much of a Facebook user.

Meanwhile, he loved sharing videos from his daily life on his YouTube channel with 1.62K subscribers.

Jussi-Pekka Kajaala stands to a height of 6′ 4″ (which is a foot more than Adam’s 5′ 7″) and a lately reported weight of under 88 kg. The last time we saw him, he had dyed his short hair white, also sporting tattoos all over his arms.

Unlike Adam, who won the 2010 Four Continents Championships and the 2016 U.S. National Championships, Jussi-Pekka Kajaala is a realtor.

Working at a real estate business company Kasslin LKV since January 2017, he did not appear to have considered sports as a career at any point in time.

When People Magazine asked Adam if his boyfriend would ever join him on the ice, he had said, “He has not been skating for years.”

Until Jan. 2021, he had still not completed building his own house.

In line with what a friend spoke with PEOPLE, Jussi-Pekka Kajaala and Adam Rippon met through Tinder.

Later, Adam himself revealed that he and Jussi talked for like seven months before they started to hang out a little bit more. The couple who faced some linguistic challenges, in the beginning, was taking things slow only because they were both really busy.

Before Adam confirmed his relationship with Jussi, he would share these teasing Instagram posts. For instance, the time in April 2018, when he posted a shirtless photo of the two hiking on Los Angeles’ Runyon Canyon writing, “Good boys Finnish first”.

Anyway, now, with the engagement declaration, they also hinted about a soon-to-be happening wedding. 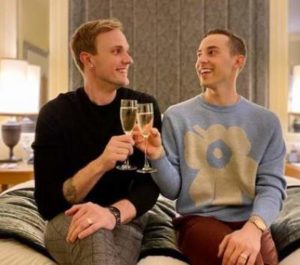 The couple, who first started dating in 2018, got engaged around the time when Adam was visiting Jussi in Finland. Word has it, Adam was there from November of last year until Jan. in 2021. About which, Adam said:

“We didn’t have the chance to see each other for most of 2020. The engagement was something we had talked about earlier so when I was finally able to get to Finland this November we felt like it would be the perfect time.”

The way Adam put it to PEOPLE, both the men had got down on one knee, as they proposed together. Apparently, they were together through everything, from buying the rings, picking them, to unboxing them and giving them to each other.

“We did it at the same time so we both got to be the one who proposed!”

And this, of course, happened during a low-key night at Hotel Kamp in Helsinki.

Meanwhile, about the looming wedding, Adam said they haven’t started wedding planning just yet. At the time, he and Jussi were thinking of a courthouse wedding because “it’ll be pretty hard” to get both of their families together in the same place. As a solution to this, they would probably film the day to share it with their family and “so that everyone feels included!”.

All been said, and despite Jussie attempting to build a summer home in Finland, he also said yes to moving to Los Angeles with Adam.

“He has not been skating for years.” Rippon said When People asked him if his boyfriend would ever join him on the ice