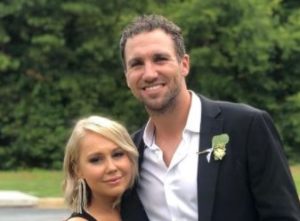 On May 4, 2021, commemorating RaeLynn’s 27th birthday, the husband-wife both took it to their respective IG to reveal their pregnancy. RaeLynn shared that she was “21 weeks into carrying their baby girl”, and her daughter’s arrival was the most awaited thing for the “Georgia Peach and Texas Rose”.

So, who is RaeLynn’s “Georgia Peach”? Stay till the end of this Josh Davis bio to learn all about him.

Corresponding to his birthday, Josh is of Scorpio zodiac.

As for Josh’s passion, he loved spending time with his family, watching his wife perform, reading, going on hikes with his wife and dogs, and traveling.

Fayetteville, Georgia native, Josh Davis is a family guy. His IG was filled with pictures of them, and always with a sweet little caption.

According to him, his parents, Mark and Pam Brown Davis were an example of “love”. They were together for over 40 years, and he especially thanked his dad for showing him how to love a woman.

On Mothers day 2020, besides wishing his mother, Josh also mentioned his mother-in-law, Callie Gray, over his IG. He wrote,

“Happy Mother’s Day to the best mom and mother-in-law around! Love y’all!!”

As for Josh’s siblings, he has an older sister who went by the name “@jlcrisler” over IG and a brother with “the heart of a lion” named JD Davis.

Trivia: Josh’s grandmother passed away on Jan 25, 2016. He shared that she was “an incredible lady” who “had an amazing impact on” his life.

As of May 2021, Josh entertained 36.3K followers over Instagram. Most of his posts featured his close ones; especially RaeLynn.

Josh Davis is a financial advisor who has worked with TBH Advisors since Oct 2015. However, in 2017, he joined the military and spent two years training at Fort Benning and Fort Bragg. So, as of 2021, he split his time between the military and TBH.

Before joining TBH, Josh took on a job at the Woodbury Financial Service from Jan 2015 to Oct 2015.

Apart from this, Josh is also a former professional baseball player. He played for the Chicago Cubs from Jan 2013 to Jan 2015.

In light of his education, Josh attended Belmont University from 2009 to 2013, for his bachelor’s degree in BBA.

Josh Davis and RaeLynn’s started dating in 2012 after they met at a church on a fateful Sunday.

“Obviously I wasn’t focusing on Jesus that day — I was praying, like, ‘Who is that hottie over there? Hallelujah!’ ” RaeLynn said.

It seems that after noticing Josh, RaeLynn slid into his DM’s, and later, they reconnected at a mutual friend’s wedding. The rest is history.

The lovebirds then went on to hold their wedding in Feb 2016 at a farm in Franklin, Tennessee. Of all the popular faces that appeared for the ceremony, Blake Shelton and his girlfriend, Gwen Stefani, were probably the most prominent ones.

Reportedly, Blake also threw RaeLynn and Davis an ugly Christmas sweater engagement party in December 2015, where he also introduced the couple to Stefani.

Josh had proposed to RaeLynn back in October 2016 at Belmont University where he led RaeLynn on a scavenger hunt visiting various places before he finally bent the knee.

Did you know: Josh made a cameo on RaeLynn’s Keep Up! music video in 2020. According to RaeLynn, her husband wasn’t “much for being in the spotlight”. However, she convinced him to be a part of the video with some tequila shots.

“It was a blast having him on set. He loved seeing the process of the video!” She remarked.