Daniel Waldron Bio: Olivia Amato, Age, Job, Who Is He?

Peloton instructor Olivia Amato announced her engagement to her boyfriend Daniel Waldron via her Instagram. The couple stayed very private about their relationship as of this writing. However, we’ve dug up a little information on Olivia Amato’s boyfriend-turned-fiance Daniel Waldron.

So, scroll down this Daniel Waldron Bio to learn about his age, job, and other information related to him.

Talking age, Daniel Waldron appears to be in his later 30s. But, he kept the details of his birth to himself. Hence, his date of birth and birthday remained a mystery as of this writing.

Daniel Waldron Family, Is He From New York?

Daniel Waldron is one of the three boys born to his parents. He is an Irishman, hailing from his hometown of Galway, Ireland. Almost no information could be discovered on his parents, however, his father was featured on his brothers’ Facebook posts.

Daniel Waldron has two brothers named Michael Waldron and Eoin Waldron. Not much is there about Michael in the public domain, but Eoin lives with his wife Lynda Waldron in Dubai, United Arab Emirates. Like Daniel, he also attended NUI Galway. Together, they have two children.

Daniel Waldron stands tall at least at the height of 6 feet (1.83 meters).

On Instagram, Daniel Waldron goes by the name (@daniel_waldron). He gathered 887 followers in total as of Sept 2021. On the profile, he entertained his followers with 160 posts but he kept it private for others to avoid viewing his content.

Daniel is also on Facebook where he hasn’t updated anything new since 2016.

Starting with education, Daniel Waldron, after graduating high school, attended the National University of Ireland, Galway. He graduated with a bachelor’s degree in engineering with a focus in Civil Engineering in 2005.

After taking a break from education for three years, he attended Baruch College and studied Finance.

Speaking about his career, Daniel Waldron attended SISK Group as a graduate civil engineer. He worked for the company for five months in County Galway, Ireland. After moving to New York, he started working at Marquee New York Nightclub in January 2006.

Daniel landed the position of General Manager where he worked until September 2008.

From December 2008-March 2012, Daniel switched lanes and joined ICAP as a broker. After quitting his job at ICAP, he joined Tradition Securities and Futures as a Broker where he has been working since July 2012 (as of September 2021).

But, the Galway-born inter-dealer is best known as the co-founder of the bespoke tailoring label Alexander Nash, based in New York. He co-founded the company in 2011 collaborating with tailor Alex Summer. As the story goes, they met each other in the Marquee nightclub in New York where summer was working as a security.

They opened their first studio in Chelsea. Their suit costs a minimum of $3,500 and they procure quality wool from Italy, England, and Australia.

Their products can be explored here. But, according to his Facebook he only owned the store until September 2016.

Trivia: Alexander Nash was named after (head of design) Alexander Sumner’s uncle who was was killed while working as an ambulance driver in World War I.

In 2021, Daniel Waldron got engaged with his girlfriend Olivia Amato, a fitness instructor working in Peloton. While the New York-based broker hid the news behind his private Instagram, his girlfriend took it to her Instagram to share it with her fans.

Olivia shared a slide show on her recent Instagram post where she posed with her fiance while showing off her big rock. They were at the beach and Daniel, in the first snap, held her against his chest.

For the caption, she wrote, “sharing a little bit of my happiness with you 💖💍.” 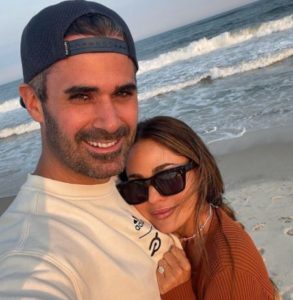 Daniel Waldron and Olivia Amato together on the day of their engagement (Pic: Olivia’s IG)

Their dog Tobi also appeared on the post where Tobi had the engagement ring nestled in some fabric around his neck in the third photo in the slideshow.

Neither of them spoke anything regarding their upcoming nuptials.

Daniel and Olivia both remain very private about their relationship. The story on how they met and since when they started seeing each other, the appealing stories require further unraveling.

2 Replies to “Daniel Waldron Bio: Olivia Amato, Age, Job, Who Is He?”