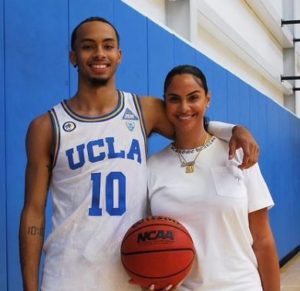 Johanna Leia earned wider fame as a mother of budding basketball star Amari Bailey. However, her new relationship with rapper Drake has brought attention to her, and fans wanted to know more about her.

Delve into this Johanna Leia Wiki to learn more about her life.

It seems Johanna Leia is dating Toronto-rapper Drake. However, neither of them has spoken anything in that regard.

The possible relationship between Johanna Leia and rapper Drake first caught everyone’s attention when they were spotted together in June of 2021. She was sitting courtside with her new man and his BFF, actor Michael B. Jordan for her son’s basketball game. 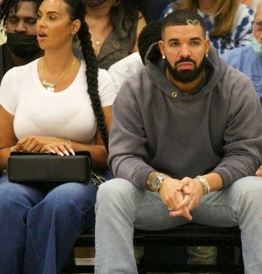 Johanna and Drake together at a Sierra Canyon H.S. basketball game (Pic: TMZ)

People mostly focused on Drake and Michael, that day. So, they weren’t spotted getting all lovey-dovey at the time. However, the social media blew up once again when Drake booked the whole LA Dodger stadium for a romantic date with Johanna.

They were spotted sharing an exotic private dinner. The rapper took the advantage of LA Dodgers being out of the town on 8 July 2021. They were having dinner at an elaborately set table on the third baseline.

Besides a butler, there was no one accompanying the couple. A source also told The Sun, there were two SUVs parked outside of the stadium.

Age 40 as of July 2021, Johanna Leia was born in February of 1981. She receives birthday wishes from her friends and her family on 19 February. Per that information, Pisces is her zodiac sign.

Johanna Leia was born to her mother Joan Edelberg and her anonymous father as Johanna Edelberg in the United States. Talking about her mother, Joan was born in Chicago and grew up in the same town. She worked as a real estate agent and has over 25 years of experience in the business. Her company is @ Properties which is based in Chicago, Illinois.

Joan is a proud mother who shares lovely words of praise for her daughter on her social media regularly. Based on her posts, she raised Johanna as a single mother from an early age.

Her mother received no help to raise her. Johanna watched her mother run hospital programs, came home and cook dinner, made sure a taxi was there to pick her up to go to after-school basketball, or activities, buy a beautiful home as a young mother.

As for her father, there are no details on him, and abandoned her family when Johanna was young. Based on her last name Edelberg, Johanna Leia is a Jewish-American by ethnicity. She appears to be of mixed race, but there exist no further details on her heritage.

What Is Johanna Leia Height?

It is apparent Johana Leia underwent a few surgeries to enhance her stunning looks. She must’ve got the breast and buttock implants which gave her the plus-sized body that she flaunts on her social media.

The possibility exists that Johana might’ve done surgery on her lips, but she never addressed multiple plastic surgeries that she underwent up until now. 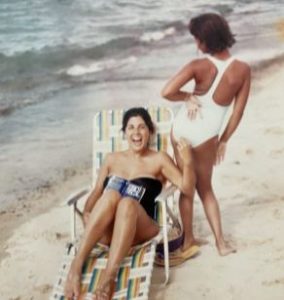 The snap of her is from her teenage years but it is the only pic of Johanna that we discovered of her before surgery.

Likewise, Johanna is also on Twitter (@onlyjohannaleia) where she gathered 1252 followers. She posted a total of 804 times as of 10 July 2021. Likewise, she goes by the name Johanna Edelberg on her Facebook where she hasn’t posted anything new since December of 2019.

Johanna Leia has built a total net worth of $700 thousand from different jobs which she did over the years. As reported, she was signed by Wilhelmina Models and Ford as a model. In 2017, she also made it to the cover of ENDEE MAGAZINE for the September issue.

Back in 2017, Johanna also worked as a host of The Koolout Radio Show at WVON 1690AM – The Talk of Chicago. But, the total duration of her working as a radio show host remains unaddressed.

The Chicago-native, however, is widely known for Lifetime’s reality show Bringing Up Ballers. Johanna was joined by other four moms (Peyty Willborn, Nikki Burnett, Heather Williams, Tiffany Lynn) who were juggling their busy life with their sons’ budding careers as basketball players.

But for now, Johanna has been pursuing a career as a social media influencer. With a very impressive number of followers, she promotes fashion brands. Johanna mostly promotes clothing of FashionNovaCurve, the company is a Global Plus-Sized fashion brand.

Who Is Her Son?

It appears Drake is also very close to Amari. As a father himself, he might be ready to take on the role of father figure to Amari and his 7-year-old sister, Savannah. There were also spotted hanging out with each other. So, they may be in a process of creating a strong bond with each other.

Talking about her husband, Johanna Leia was previously in a relationship with NFL star Aaron Bailey. Aaron was born in 1971 who was a wide receiver for the Indianapolis Colts in NFL for five seasons. As HITC reported, he played Arena Football League from 2001 to 2006.

Aaron is best remembered for the 1996 AFC Championship game in Pittsburgh game, where he almost secured the final-play pass from Jim Harbaugh.

Besides his career, Aaron was reportedly married to Johanna which he had shared in an old interview. However, the separation and the eventual divorce weren’t addressed anywhere. But, Amari has stated that Johanna Leia was a single mother in one of his social media posts.

Aaron, back in 2013, was a Learning and Behavioral Specialist in the Kentwood Public School district in Michigan. He remarried to his second wife Jennifer and had seven kids (Aaron Jr., Ashley, Michael, Airyanna, Alana, and Aaliyah) including Amari.