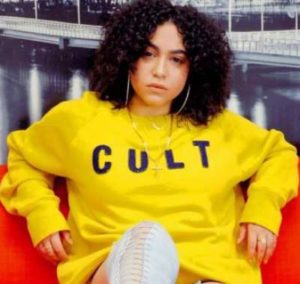 America’s Got Talent returned for season 16 and so did fresh new talents, feel-good performances, and our favorite judges. Among the array of singers, this season is Jessica Núñez, AKA Jayy. Find out all about her in this Jessica Núñez AKA Jayy Wiki.

Jessica Núñez AKA Jayy On AGT

Jessica Núñez with a stage name Jayy Dunez sang an emotional rendition of “Lost Without You” by Freya Ridings on the June 6 episode of AGT 2021. (Her stage name is a combination of her mother’s maiden name, Duran, and her family name.)

She wowed the judges and the crowd receiving all four “Yes” for her performance in honor of her late parents.

Following her performance, judges gave her their words of encouragement. Even the toughest of all Simon Cowell expressed, “I think what you just did was, I mean, incredible. To be able to sing a song like that, with that lyric, with all those memories, you know, in your head, I think, is extraordinary.”

Jessica Núñez’s story about her parents on AGT brought tears to everyone’s eyes. She shared the story of how her parents were murdered right in front of her in West Philadelphia. She was only 19 at the time.

Jessica’s parents Porfirio Núñez and Juana Núñez and aunt, Lina Sanchez was killed in a robbery at their grocery store in Philadelphia.

The suspects in question were later identified as Muhammed and Malik Scott. Jessica who witnessed it all had testified against them in court.

At first, the defense attorneys had argued that the men had been subject to a case of mistaken identity. But, both of the men were sentenced to life in prison five years later.

“They thought that the little girl they left alive was not going to be able to get on that stand. I was able to stand there and say everything that they did to my family. I did it.”

After her parents died, Jessica cut her hair short and took jobs in bodegas, so if the gunmen came in, she could recognize the killers. (The remaining of her family members would not let her behind the counter again.)

That been said, her parents are still in her memories. Every time before she sings, she prays to ask for her parents to be with her, not only to give her strength but to share in her happiness. At the same time, she wants to keep their legacy alive through her passion for music, which she and her family shared.

Jessica acquired her love for singing from her father. Meanwhile, she revealed, her grace and quiet sensitivity, come from her mother.

Following the tragedy, Jessica Núñez AKA Jayy had to become more than a big sister for her younger siblings. She shared on the AGT platform how she had to stop pursuing her dreams. She explained it was a long process for all of them.

Jessica has a younger brother, Moisés Núñez, and a sister, Elizabeth (a.k.a Laura). By Sep. 2019, Laura was in college and their brother Moises had started a career as a mechanic.

Not to miss, Jessica is a Dominican inheriting a blended Cuban and Spanish ethnicity. Her father, who trained as a psychologist in the Dominican Republic, had moved the family to America for a better life.

Born as a Saggitarius, Jessica Núñez AKA Jayy grew up celebrating her birthday every year on Dec. 3rd. Also, she reached the age of 29 in late-2020.

Until July 7, 2021, Jessica Núñez had 26.1K followers on her Instagram @jayymusic_official.

Jessica Núñez AKA Jayy Net Worth

Reportedly, Jessica Núñez AKA Jayy had less than an estimated $300K net worth before she participated in AGT vying to win a $1 million prize.

Before AGT, when she was 27, Jessica performed on the Latin America’s Hit TV Singing Competition Reina de la Canción. The show is like ‘The Voice’ but in Spanish.

And back in 2016, she also performed on a Fox show called ‘Q’ as part of the R&B group Aviance.

However, in the meantime, her original music could not be found on streaming platforms.

Jessica Núñez AKA Jayy did not seem to be dating anyone at the time of this writing. Or, maybe she just wanted to keep her boyfriend away from her getting-bigger fame. Or, maybe she is just busy compensating for her lost years and being a guardian to her orphan siblings.