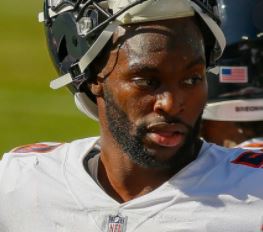 The outside linebacker of the Falcons, Barkevious Mingo turned himself in on July 2021 after being charged with “indecency with a child — sexual contact.”

So, what was going on? Was he married at the time? Stay till the end to find out if he has a wife or a girlfriend.

According to the Arlington Police Department, Barkevious allegedly invited a teenage family member (victim) and the boy’s friend to hang out with him. He then took them to a few amusement places and later for dinner at BJ’s restaurant.

Reportedly, the football player also treated the boys to a shopping spree, paying for items they chose from Nike.com.

On the night of July 4, 2019, Barkevious and the boys then returned to the local hotel where Barkevious was staying. Approximately around 3 a.m., Barkevious then allegedly “pulled the victim’s underwear down and rubbed his penis up and down, in between the victim’s butt crack.”

The complaint against Barkevious was filed in January 2021, by the victim’s mother. A month later, the case was then assigned to the Arlington Police Department Crimes Against Children Unit, and they cooperated with Nike to check sales records from July 4, 2019. Finally, confirming the purchase, Barkevious was charged with “indecency with a child — sexual contact,” and “grooming behavior.”

In July 2021, Barkevious turned himself in “on his own accord in consultation with his attorney” and was released from custody after posting a $25 thousand bond.

“Mr. Mingo is the victim of a false claim, and we believe this is motivated by money or some other ulterior motive. We are confident when the truth comes to light, my client will be fully exonerated.”

As per his birthday, Barkevious is of the Libra zodiac.

The third oldest of the siblings, Barkevious was born and raised in Belle Glade, Florida. He then later moved to Louisiana where he studied at West Monroe High School. Excelling in athletics, he then received scholarships from various states, but he decided to join Louisiana State University LSU in 2009.

Barkevious Mingo’s contract with The Atlanta Falcons was immediately terminated after he got charged with “indecency with a child” in July 2021. It was only that very year, Barkevious signed a 1 year $1,250,000 contract with Falcons including a base salary of $1,075,000 and a signing bonus of $175,000.

How Much Is Barkevious Mingo Net Worth?

Barkevious Mingo flaunted a stunning net worth of above $10 million in 2021.

Most of his deals and earnings are shared in the preceding subheading.

Barkevious Mingo Wife: Is He Married?

Barkevious Mingo is private about his love life. So, it is unclear if he ever married his girlfriend Lauren Tarver or not.  But being a football player up in the spotlight, it’s almost impossible for Barkevious to take Lauren as his wife without being caught by the paparazzi. Furthermore, his socials provided no insight on his married/dating life. This leads us to believe that Barkevious wasn’t married as of 2021.

Also, rumors had that Barkevious and Lauren have long split up.

Just in case you missed their dating history, the two started seeing each other before 2013. Lauren was still in her bachelor’s at LSU then, and we guess that the two met while at the university as well. They were later spotted together on various occasions; especially at Barkevious’s football games.

Barkevious’ now ex, Lauren V Tarver works as an associate in the corporate practice group, Jones Walker LLP, and was also a member of the economic development team and public finance team.

Before that, Lauren was an assistant district attorney for the Caddo Parish District Attorney’s Office for almost 4 years. She has also worked with several reputed personas such as Governor-Elect John Bel Edwards, Greg Traver, and Mathook, and Lafleur.